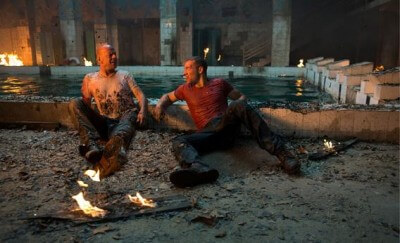 John McClane (Bruce Willis), the hyper-violent man perpetually wrong in place and time, has always been Rambo by way of “grumpy cat.” The only thing that makes Die Hard actually Die Hard is the surly sense of humor McClane spouts whilst committing copious homicides. Sadly, A Good Day to Die Hard turns him into a boring dick who you wish would find death a little less difficult to embrace.

A Good Day to Die Hard is not Die Hard; it’s also not good and mostly takes place at night. So really, the whole title is a lie. What’s more, it doesn’t even follow its own most basic formula, as this isn’t a good cop in the wrong place at the wrong time; McClane kinda, sorta causes all of the problems in the movie. Let me explain.

Within a few minutes, McClane leaves whatever passes as “the comfort of New York” for Russia, where his son, Jack (Jai Courtney), is on trial for murder. When a jailbreak occurs, McClane finds his son helping a prisoner to escape. You see, Jack isn’t a bad guy but a good guy, a CIA guy, and he’s on a mission…a mission that McClane screws up.

Had he just stayed home, his son would have escaped with his hostage, having not been delayed by his dad showing up and basically pointing the bad guys to him. This is the first Die Hard film where the best thing our hero could have done to save lives is not leave the house, as the wild car chases through the rest of the film had to result in at least a few dozen innocent casualties.

The “villain” is as irrelevant as his evil plot, which makes absolutely no sense. Let’s just say that his plan is like a Rube Goldberg machine assembled in the dark. Speaking of things that are completely devoid of light: Jack is a shadow of a character. He hates his father before he doesn’t, each with about as much compelling motivation. Even the goofy action extremes of the last so-so film in the franchise, Live Free or Die Hard, have been replaced by repeated shaky-cam jumping through plate glass.

Die Hard hasn’t been sacred since the first sequel saw an on-the-ground ejection from a plan, so the biggest crime of this latest installment isn’t the sullying of some holy character so much as it is being boring as hell. Bullets and noise, sturm und drang, do not inherently make for excitement, especially when you don’t care who is shooting at who. And you won’t. You absolutely won’t.

It’s obvious that Willis really likes this series and this character, so it’s shocking he didn’t throw a fit at what writer Skip Woods (X-Men Origins: Wolverine) and director John Moore (The Omen remake) did to both here. This is tracking huge at the box office, guaranteeing a sixth Die Hard movie. Here’s a thought: before someone writes and directs the next one, have them watch the first film at least once.