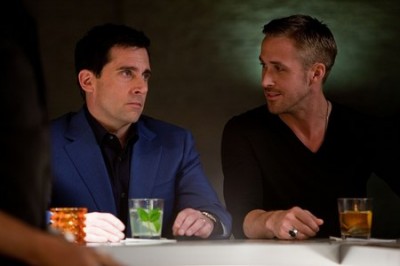 Without a single scene of slapstick puking, accidental drug ingestion or manic violence, Crazy, Stupid, Love, the new movie from directors Glenn Ficarra and John Requa (I Love You, Phillip Morris), feels like some kind of long-lost comedy relic. That’s meant in the best possible sense. Although it honestly isn’t very crazy or stupid, as is the current comedic trend, it’s still pretty funny. And just as importantly, it has a heart ten times bigger than most other romantic comedies in recent memory.

Shortly after his wife of many years (Julianne Moore as Emily) confesses her desire to divorce and her infidelity with a coworker (Kevin Bacon as David Lindhagen), the infinitely dad-like Cal (Steve Carell) wanders into a dim, upscale bar. He’s too distraught to realize how out of place he is, but the bar’s resident womanizer Jacob (Ryan Gosling) spots him right away. Feeling a little disgust and a little heartache in the face of Cal’s misery, Jacob offers to take the poor guy under his wing to, as he describes it, find his lost manhood.

Meanwhile, love is troubling many others as well, including Cal’s hormonal son Robbie (Jonah Bobo). He’s infatuated with the babysitter, Jessica (Analeigh Tipton), who herself has a schoolgirl crush on Cal. Emily tries to decide where things should or could go with the universally scorned David, and a young lawyer named Hannah (Emma Stone) does the same with her annoying boyfriend Richard (Josh Groban).

Crazy, Stupid, Love gives an honest shot at balancing all of these narrative threads to say something big and universal about love, both the real and the superficial kind. And to that end, it does an utterly sincere if not always graceful job.

What’s compelling here is the interplay between the actors. Cal, one of Carell’s saddest sad-sack schmucks, is played with the same level of pathos Carell usually brings to his work. And he’s a particularly moving character alongside Gosling’s fearless counterpoint. Jacob, aggressive lecher though he is, is more of an undeniably cool James Bond type than a straight-up slime ball.

But he has some problems of his own, as hinted at in Gosling’s best scenes. Those come when he’s alongside Ms. Stone, who herself is memorable, although she never really gets the amount of screen time she deserves. Moore, in the film’s other major female role, fares much better. Her work here is another example of how well this cast works together, as her scenes with Carell feel like they have the real weight of 20-plus years of marriage behind them.

There are a few bits of typical Hollywood slushiness worth fretting about (the cringe-inducing scene where Cal highjacks his son’s middle school graduation for his own romantic ends comes to mind), but there’s so much more to love in the film’s sweetness and the chemistry between these performers. And there’s more than just charm in the fact that Crazy, Stupid, Love earns its laughs the old fashioned way.