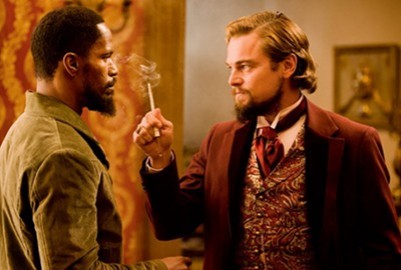 Oh, Quentin Tarantino, you’ve really done it this time, haven’t you? Nobody really cared when you fantasized that Hitler didn’t end his reign of terror with one last murder (his own), placing therapeutic cinematic release into the hands of machine-gun toting Jews blasting the bogeyman back to hell in Inglourious Basterds. But slavery? This ain’t Europe, QT; here in America, we like to judge everyone abroad for their sins and keep ours buried at Wounded Knee and Gettysburg.

But there you go, digging up white ghosts and giving a six-shooter to a slave-turned-superhero. While every movie about slavery has the obligatory “face to the camera back whipping scene,” few show a runaway slave pulled apart by dogs, and as far as records indicate, none have cracked open a dead slave’s skull to demonstrate the pseudo-scientific bullshit racists used as a reason to keep other humans as glorified pets. But you? You shove our faces in this, teaching us about “Mandingo fights” in which black men were forced to cockfight to the death. Then, right when we can’t take anymore of this, you paint the screen red with the blood of our sick, evil ancestors.

Thank you. Thank you so much.

Quickly, the plot: Django (Jamie Foxx) is a slave recruited by a bounty hunter, who is not accidentally named Dr. King Schultz (Christoph Waltz), to find and kill wanted men that Django can identify but Schultz cannot. They become friends (over a delightfully used Jim Croce song) and Schultz, having freed Django, “feels responsible” for him. As though a white man who once owned a black man owes him more than just emancipation; he owes him equality, which is not a simple synonym for freedom.

Django is seeking his wife, Broomhilda (Kerry Washington), who is owned by Calvin Candie (Leonardo DiCaprio). He keeps her at an estate run by an elderly slave named Stephen (Samuel L. Jackson). After a bloody winter together in which Django’s aptitude for righteous violence is more than demonstrated, the bounty hunting duo set their sights on “Candie-land,” and spaghetti-western mayhem ensues.

Because “movie stuff” is the least interesting part of this movie, let’s only briefly mention how this fits into Tarantino’s filmography. Having explored Eastern vengeance (Kill Bill) and European revenge (Inglouious Basterds) he has now added an American perspective, even if some would wish to ignore it. It’s also important to mention that working without his life-long friend and editor, Sally Menkes, who sadly passed away, Django Unchained is easily QT’s messiest film, with fragments of aborted subplots, second-act pacing problems and a few too many indulgences.

But the more complicated, more ponderous element is the character of Stephen, whose name resembles Steppin Fetchit for good reason. In some ways, he’s revealed to be more of a villain than the mustache-twirling Candie, which either suggests a paternalistic and condescending view that no matter how evil whites are, blacks are still their own worst enemies or suggests that the worst damage done by slavery was manipulating a cultural mentality, depending on how much credit you want to give Tarantino. It sure helps there’s no “white messiah” who saves the day…

The two best moments, the ones that suggests QT’s sophistication deserves the benefit of our doubt, involve of all people Don Johnson, who plays a plantation owner named “Big Daddy.” In telling one of his servants to treat Django as a free man, the servant asks if she should treat him like a “white person” then. Big Daddy instantly responds in the negative, deciding its best to treat him like a mentally challenged white person if anything. Again, Tarantino reiterates the separation between freedom and equality. Oh, and then in the next scene he turns Big Daddy and the entire Ku Klux Klan into emasculated, half-wit cartoon characters.

Tarantino again gives us escapist revisionist history that does more to show the vile nature of slavery than anything in recent memory. Spike Lee may claim that Tarantino is using slavery for fun and profit, but like his choice in sports teams, Lee is way wrong. Django Unchained is a fun action movie nestled in a comedy wrapped in an homage to spaghetti westerns. It is more flawed than many of his other films, but it is more ambitious, as above all else this is a violent wake-up call that we cannot wish slavery away from our cultural history. We must own up to it and dream, together, of shooting those sons of bitches from our past right in the face.