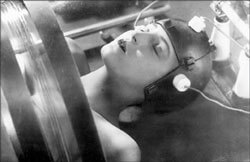 Brain wrinkle time. When is a review not a review? Answer: When dealing with “the complete” Metropolis. Director Fritz Lang’s 1927 dystopian epic, which birthed modern sci-fi cinema from its loins as assuredly as if we had ultrasonographic images of Blade Runner in its womb, was truncated to around 90 minutes after its original screening in Berlin. In 2008, the Museum of Cinema in Buenos Aires, Argentina found a print in its archives that added an additional 25 minutes to a 2001 restored print that pushed the film to more than two hours, for a grand total of 153 minutes of proletariat-investigating, Nazi-predicting, imagination-expanding, cinematic history. It’s hard to really review Metropolis in any form, even its supposedly restored “complete” version … but excuses are for wimps or those with money, so here goes. The film follows Freder (Gustav Fröhlich), son of Joh Frederson (Alfred Abel), as he falls in love with Maria (Brigitte Helm), a champion of “the people.” As Freder is uncovering the truth about the working-class blood that fuels his father’s skyscraper-laden city, Rotwang (Rudolf Klein-Rogge) is inventing a robot inspired by Freder’s dead mother. When that robot, dressed to look like Maria, encourages the workers to revolt, all schnitzel breaks loose. As much as modern audiences can relate to the grappling of have-nots with the machine of industry, much of what makes Metropolis a masterpiece of silent cinema is, by its very nature, unspoken. It’s in the still-staggering visuals, in the universal appeal of the David standing against the wealthy Goliath and in the precedent of big-budget spectacle that still stands today. Separating the film from its legacy is difficult, as the history of the thing, with Lang divorcing his wife and writer of the film Thea von Harbou when she joined the Nazis, is as captivating as any footage, restored or otherwise. While the hand-wringing, temple-rubbing overacting is a testimony to the times, it also speaks to how far this craft has come. Praise it for its pioneering, but feel free to laugh at its goofy limitations. Far less funny is the screening at Film Streams Ruth Sokolof Theater, which on Oct. 5, at 7 p.m. will be accompanied by a live score from the Alloy Orchestra. If you can’t catch that sure-to-be-brilliant experience, check out the “complete” Metropolis streaming on Film Streams’ website at filmstreams.org. What is owed to Metropolis may outweigh the joy of watching it, but luckily, not by much. GRADE: A-