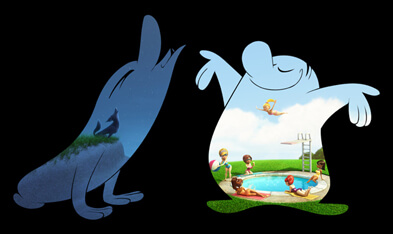 Oscar pleasure is usually reserved for grouches or award show addicts. As both, one of my favorite weekends has finally arrived: Film Streams at the Ruth Sokolof Theater (FilmStreams.org) presents its annual screening of the year’s Oscar-nominated short films. These proud members of the itty-bitty cine committee are pint-sized powerhouses proudly packaged together for ease-of-viewing on the big screen. As has become an annual tradition, we’ll grade each of the live-action and animated shorts below, giving predictions for who will win while lamenting the inevitable loss by my favorite selections.

To be direct, writer Caroline Bruckner and director Tanel Toom’s Confession made me feel sad. Very, very sad. Would that I could wax more poetic about this excursion into the macabre day experienced by 9-year-old Sam (Lewis Howlett) on the eve of his first confession, but I can’t. The things that Sam and his buddy Jacob (Joe Eales) get involved in are all sorts of ooky and icky. Sure, it’s pleasingly shot, but there seems to be no lingering point other than delivering one divine bummer.

Keeping with the theme of wee lads with accents getting into sticky wickets, writer/director Michael Creagh presents The Crush , the familiar tale of a tot who falls for his 2nd grade teacher (would that be considered a cougar mauling?). But just when you’re thinking “Aww,” out come the pistols. Thankfully, young Ardal (Oran Creagh) is not cut from an American cloth, and the biggest shot fired is at our hearts.

Writer/director/lead actor Luke Matheny looks like the lovechild of Sideshow Bob and Napoleon Dynamite. His black-and-white God of Love is giddy, goofy goodness that represents the only comedy in the short film litter (and, thus, the surest crowd pleaser). From quotable dialogue (“Maybe I could convince her she has diabetes?”) to an adorable plot (a dart-throwing crooner is given the power of cupid), one can only hope someone upgrades Matheny to the big leagues. We could use a few comedies with more “aw shucks” than words that rhyme with truck.

I can hold my breath for 19 minutes. I know this because that’s how long writer/director Ivan Goldschmidt’s Na Wewe lasts. Set in Burundi in 1994, this lung-emptier follows Hutu soldiers as they detain a random bus and begin screening for Tutsis. This is one of those great examples of what the short format can allow, as this singular scene unfolding in real time is a vital way to understand the horror humanity has to offer.

Don’t be surprised if writer Tom Bidwell’s Wish 143 is turned into a full-length feature, as its concept (a teenage boy dying of cancer wants to lose his virginity) seems pitch perfect for pitch meetings. Director Ian Barnes ably dances from humor to solemn tragedy without stepping into tastelessness or melodrama. This is helped by great performances by Samuel Peter Holland, who is riveting as the dying David, and Jim Carter, whose affable priest manages to tiptoe trite traits often assigned to such a throwaway character. It’ll warm and break your heart in just under a half-hour.

Although the race is tight between Na Wewe and Wish 143 , I give the slight nod to the latter on the grounds that voting against a sweet dying boy seems a little, I don’t know, evil.

Should win the Oscar: Na Wewe

It’d be stranger to not see a Pixar film on this short-film shortlist, as the perpetually nominated producers haven’t taken a year off in seemingly forever. This year’s entry, Day and Night , was directed by Teddy Newton and skews strangely on the side of “message-heavy” for the generally apolitical/we-just-want-to-give-hugs studio. Blending hand-drawn and CGI animation, the quick flick follows anthropomorphized representations of “night” and “day,” who make a statement about fear of the “other” and contempt for the “unknown.” Not bad for a half-dozen minutes.

Featuring a crazy big voice cast (Helena Bonham Carter, Tom Wilkinson, John Hurt, Robbie Coltrane), The Gruffalo was shown on BBC TV because they do some cool stuff on the small screen in Limey Land. Screenwriters Julia Donaldson, Jakob Schuh and Max Lang adapted the children’s book by Donaldson and Axel Scheffler into a huggable CGI Aesop’s fable. A squirrel mama tells her babies all about a cunning mouse who invents a creature called The Gruffalo to scare away predators … so maybe the whole thing is an allegory for the Iraq war? I can’t be sure. Although slightly cloying and moderately repetitive, cuteness abounds.

Writer/director Geefwee Boedoe’s Let’s Pollute is supposedly a send-up of ’50s and ’60s-era educational films, but plays like a one-note, passably animated joke about consumerism and capitalism … the sort of joke Stephen Colbert makes a dozen of before finishing his opening monologue. If someone showed me this on the web, I would have applauded their mastery over flash animation and good intentions. As an Oscar-nominee? Yeesh.

The Lost Thing is blissfully weird. Writer/director Shaun Tan and director Andrew Ruhemann weave a fable about losing imagination that would rather show than tell, demonstrating our fall from childlike dreaming through one man’s discovery with a weird … thing. Looking like Lovecraft by way of Dr. Seuss, the central discovery is a half-robot, half-tentacled monstrosity that endears without saying a word. This is the sort of thing you only see once a year.

Madagascar, A Journey Diary is exhilarating. Flipping in and out of varied and often-contradictory animation styles (CGI flicking into bare-bones, hand-drawn sketches), the film isn’t a narrative but instead presents a flavor of what truly foreign travel feels like. It seems weird to say so little about a film I enjoyed so much, but this isn’t a film you explain: You just experience it.

No contest here, as Madagascar is transcendent … so there’s no way it can possibly win, right?

Should win the Oscar: Madagascar, A Journey Diary

Will win the Oscar: Day and Night

Overall grade for Animated Shorts: B+