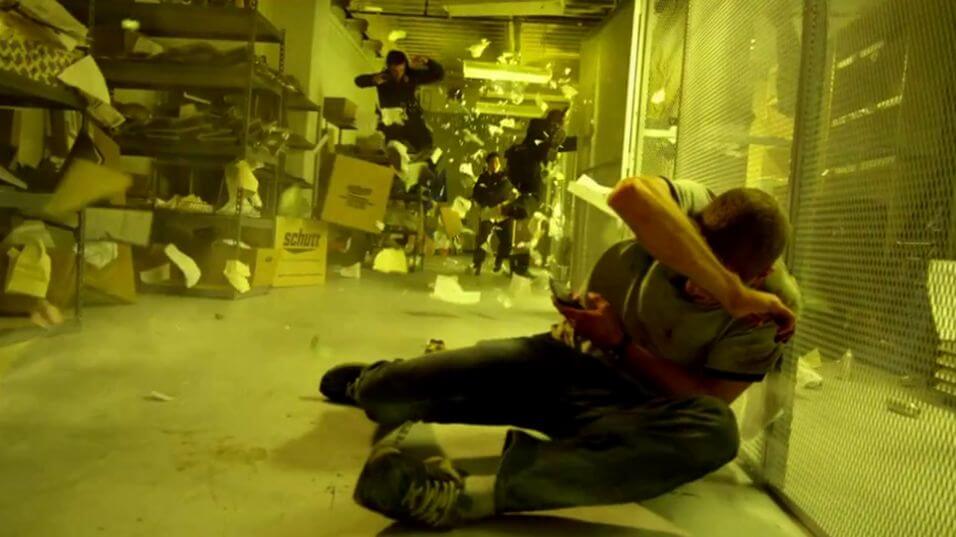 Project Almanac understands that what people really want in a time-travel movie are long stretches of people soldering circuit boards and buying batteries. I mean, why waste time pondering temporal paradoxes when audiences just want to sit back and marvel at the thrill of people drawing circles on a chalkboard? Director Dean Israelite and writers Andrew Deutschman and Jason Pagan have finally freed science-fiction from the burden of having to be smart or interesting, reducing it to attractive young people dry humping. About time!

Before we get to the unrepentant shallow narcissism at the core of this crapfest, we need to talk about the flagrantly stupid decision to use a “found footage” approach. The characters film themselves committing a crime. Twice. I am willing to accept that high-school students have the funding and mental capacity to warp space-time, but even self-obsessed jagholes would stop filming themselves while bleeding and running from the police.

Man, you know a movie is bad when writing a review for it ruins your mood. Let’s get this over with…

David (Jonny Weston) is a genius who just got into MIT but acts like he needs to write a note on his hand reminding him it goes “unzip, then pee.” His dead dad was an inventor who left an unfinished time machine in the basement, like dads do from time to time. David finds it, and he and his sister, Christina (Virginia Gardner), and best buds, Quinn (Sam Lerner) and Adam (Allen Evangelista), finish it. Jessie (Sofia Black D’Elia) stumbles upon the gang’s shenanigans, and they let her in on the secret because she’s really pretty.

When they finish the machine, they use it to go to Lollapalooza.

I swear to you, Lollapalooza is a huge, massive plot point in this film. “We have this device that can change the world! Let’s go back and watch Imagine Dragons do that one song!” I don’t know if I’m more concerned that a writer thought that up or that “time traveling to Lollapalooza” is actually something millennials would consider. These shallow pig people don’t just use time travel without considering the repercussions, one of them risks hundreds of deaths to nail the new girl. And if you were worried there wouldn’t be enough long, slow, close-up shots of the young women’s bodies, fear not! This is a Michael Bay production!

Project Almanac feels like a cautionary tale of what happens when creators make literally every wrong decision. The pace is wretched; they don’t even finish the machine for over an hour. The characters are offensively simple; “smart guy is smart,” and “pretty girl is pretty.” There isn’t even any conflict until the last 30 minutes. Then, worst of all, one of the characters in a time-travel movie refers to The Doctor from “Doctor Who” as Doctor Who. Oh. No. You. Didn’t! Project Almanac is firmly cemented as the worst time travel movie that was or ever will be, and there’s a Hot Tub Time Machine 2 coming out.