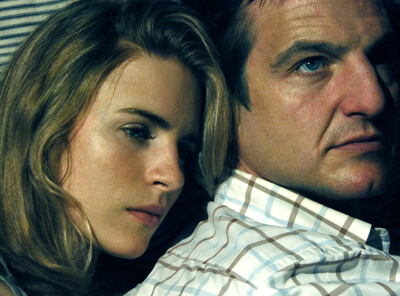 A slightly above-average human drama with a touch of “Twilight Zone” is a pretty fitting description for director Mike Cahill’s new film, Another Earth. He, and co-writer and star Brit Marling, take a bit of science-fiction, use it as hard science-fact and put it alongside an intimate story about guilt, fate and second chances. It’s an interesting approach that becomes frustratingly ambiguous at worst (watch out for that final shot) and captivating at best.

After a few drinks, and while craning her neck toward the night sky, a college student named Rhoda (Marling) crashes her car. The car she hits contains music professor John (William Mapother, better known as Ethan from “Lost”). The wreck kills his wife and son, and sends him into a coma.

Released from jail years later, Rhoda continues her self-punishment by working as a high-school janitor. Awakened from his coma, John is busy lashing himself as well, drowning in alcohol all alone in his big, old house. After a few totally unlikely scenes, Rhoda becomes his maid, trying to muster the guts to reveal that she’s the girl who destroyed his family.

Sounds like pretty standard indie-drama stuff. But there’s a big variable in Another Earth: the other earth. Or Earth Two, as radio and TV news clips threaded throughout the movie call it. It’s a planet that has appeared in our sky rather abruptly, around the same time as the fate-sealing car wreck. Apparently an exact mirror of our world, Earth Two seems to be getting closer and closer. It looms menacingly over the well-performed although slightly unbelievable drama unfolding between Rhoda and John.

A duplicate earth, presumably full of duplicate earthlings, is obviously a pretty philosophically heavy image, besides being simply surreal and dramatic. So all on its own, Earth Two says things to us — ethereal, barely graspable things. But it’s only connected to Rhoda and John’s story (the bulk of the movie) in the simplest, most practical ways.

In other words, Earth Two is just a device to add another mysterious layer to a domestic drama down on the ground. And as a device, it’s not essential and is ultimately replaceable. Cahill doesn’t unpack any of the potential connections because there’s nothing to unpack. It literally just floats in the background and only really interacts with the film in terms of the plot. You can’t escape the feeling there should be something more from a film with an idea as loaded as Earth Two.

That said, the film is still impossible to dismiss. Marling’s powerful performance is the subdued, understated kind, made all the more impressive considering she’s acted on screen only a handful of times. And, perhaps thanks to her, Another Earth does leave a strong, haunting presence, one that suggests there was something left untold, as opposed to something left unconsidered.