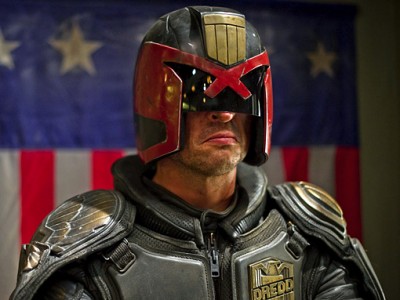 When you remake a movie that originally starred Sylvester Stallone and Rob Schneider, it’s not a challenge to clear the bar that was set. Limbo-ing beneath it, however, would require a shrink ray gun. So it is the faintest of all possible praises to say that Dredd 3D, the latest attempt to bring a gory U.K. comic book to the big screen, is the best movie to ever feature Judge Dredd. Of course, that doesn’t mean it’s good.

Both films are dark, gritty and gory and feature law officers in way over their heads, but The Raid felt like violent escapism whereas Dredd 3D feels like endless repetition. It’s never encouraging to think “didn’t they kill that guy already?” And speaking of questions, by now you’re probably wondering “Where is the obligatory plot synopsis in this review?” There’s no need to spill paragraphs worth of ink for something that can be done in two sentences.

In the postapocalyptic future, crime runs rampant because few people are willing to be law officers, who are called Judges for their ability to carry out punishment on the spot. A veteran Judge, Dredd (Karl Urban), is stuck with a psychic rookie, Anderson (Olivia Thirlby), in a high-rise complex controlled by a drug lord named Ma-Ma (Lena Headey). The rest is all shooting and noise, sometimes in slow-motion.

Dredd 3D does have a visual style that’s somewhat unique, with a refreshingly balanced color palate and nicely framed action. But you can only watch someone get shot with future guns so many times before you begin thinking about other things, like how little use Anderson makes of her psychic powers or how much Urban’s chin quivers when he gruffly whispers threats. Garland, who was responsible for other great genre material like Sunshine and 28 Days Later, was content to hammer out one semi-original idea (a drug that makes users feel like time slows down) and hope the audience hangs their own character concepts on the thematic coat racks that are “rookie cop” and “tough vet.”

What’s weird is that lots of critics have been giving Dredd 3D a pass, saying its “goofy, nonstop action” is endearing. When you aren’t the best action movie to pit a supercop against a housing complex full of villains this year, it’s hard to be anything other than bad. Sorry, bad-d-d-d. See, despite featuring three Ds in the name Dredd, Dredd 3D also incorporated the cash-grab 3D gimmick into its official title, giving it a whopping seven Ds (if you’re into counting such thing). Seeing as how the producers love that letter so much, they probably won’t mind getting another one.