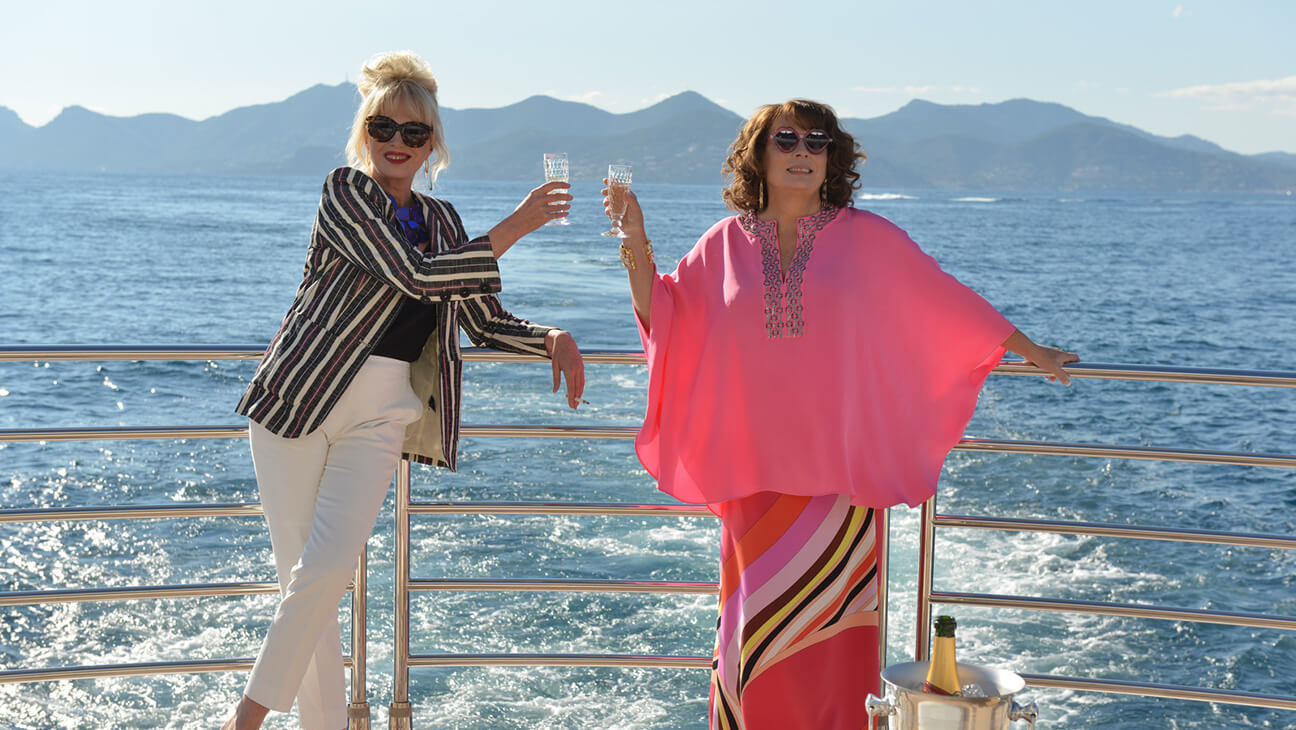 I had absolutely no idea what Absolutely Fabulous was before I saw the trailer a few weeks ago. The trailer was nothing special but, after some light research on the ever-reliable Wikipedia, it was fascinating to discover that Absolutely Fabulous was a “cult classic” BBC sitcom with a hardcore fan base. As a fairly eclectic film and television nerd, I was excited by the opportunity to watch a film like Absolutely Fabulous: The Movie as an outsider. Would the comedy stand on its own or would overwrought “fan service” make it totally inaccessible? Essentially, would I “get” it?

Major trigger warning for diehard fans of Absolutely Fabulous, as you’re probably about to “Um, actually…” me so violently that your hearts stop. The only redeeming quality of Absolutely Fabulous: The Movie—and there’s just one—is the chemistry between the film’s two leads. Edina (Jennifer Saunders) and Patsy (Joanna Lumley), a pair of intoxicant-fueled nightmares struggling to keep their glamorous lifestyles afloat, generate the few chuckles scattered throughout the film. It’s easy to see how they sustained an entire television show, because both actresses have the ability to ground absurd, cartoonish characters in what feels like genuine friendship. That ain’t easy.

From what little information I know about the original television show, it sounds like Edina and Patsy are up to their usual schemes. After magazine editor Patsy goes broke and PR agent Edina is accused of accidentally killing a supermodel, the duo flees England in search of an old fling with a lot of money. They’re pursued by a number of dull, unfunny characters, for dumb reasons that I’ve already forgotten about. Absolutely Fabulous: The Movie even tries to give some of the supporting characters things like “development” and “humanity.” However, it’s a comedy that’s at its best when the two leads are casually injecting Botox.

There’s plenty of fan service in Absolutely Fabulous: The Movie…at least, I’m pretty sure there is plenty of fan service… Every time new characters were introduced as if they were punch lines, or a joke was followed by a variation of “This is just like before,” I was aware that I was probably watching some reference to the television show that I didn’t understand. There were clearly some AbFabbers in my theater because they laughed their butts off during such moments. I just kind of had a puzzled look on my face.

It doesn’t really matter that Absolutely Fabulous: The Movie is inaccessible for newcomers. Most of the standalone jokes are unfunny on their own. I need more than some clever offhanded remarks and a few impressive moments of physical comedy. Also, points deducted for dressing up white folks as people of color. That’s inarguably some bullshit right there, no matter the context. Absolutely Fabulous: The Movie gave me a lot of reasons to skip watching the original series, but featuring a racist caricature was the death knell of my interest.