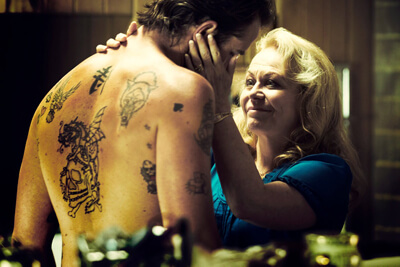 Let’s give it up for the ladies. Once the purview of mustachioed men with Italian last names, the “cops and crooks” movie genre has flung open the doors to the clubhouse. Last year gave us several films in the genre with strong female leads instead of damsel-in-distress love interests. Playing an Aussie-accented version of The Godmother in the under-appreciated Animal Kingdom , Jacki Weaver joins Noomi Rapace ( The Girl With the Dragon Tattoo ) and the young Jennifer Lawrence ( Winter’s Bone ) as muscular mademoiselles whose characters loom larger than their diminutive onscreen presence.

Now out on DVD, Animal Kingdom tells the story of the Cody clan, a 1980s crime syndicate in Melbourne, Australia, based on the real-life Pettingill family, a veritable herd of white-trash Corleones. When the film begins, 17-year-old Joshua “J” Cody (played by relative newcomer James Frecheville) is chillin’ on the couch with his dead mother, trying to decide his next move. Unfazed by his mother’s heroin overdose, he dials up the only family that he can remember — his maternal grandmother Janine Cody (played by the aforementioned Weaver, whose smile is so unsettling because it barely changes when she goes from nurturing to nasty). At first blush, J’s pincushion of a mom may seem like an unlikely candidate for mother of the year, but her wisdom quickly becomes apparent when we meet her family, whose mug shots are likely weekly fixtures on “Australia’s Most Wanted.”

The morose J soon meets two of his three uncles: Darren (Luke Ford), who’s only older than J by a few years, and Craig (Sullivan Stapleton), a tattooed speed freak with a penchant for drug dealing (rather than the theft/larceny streak that runs in the family). His oldest uncle Pope (Ben Mendelsohn) is in deep hiding, as the Melbourne cops, also a crooked bunch, have taken a “dead or alive” philosophy towards acquiring him. Guy Pearce ( Memento, The Road ) lends the movie its biggest star power as Leckie, a seemingly honest detective in a department noted for its corruption.

Although the story may sound familiar, writer/director David Michôd weaves a narrative filled with complicated interpersonal relationships and nuanced characters that defy clichés. Labeling the whole clan as irredeemable would have been too easy, especially given the sordid source material, but Michôd opts for a more realistic depiction, delicately sketching an intricate family dynamic, with Janine at its center. This puts the diminutive Weaver in a make-or-break position. Rather than channeling The Goonies ’ Mama Fratelli archetype, Weaver dials down the wild-eyed intensity, creating a character more calculating than crazy. For her portrayal of a matriarchal moll, the Academy deservingly nominated Weaver for best supporting actress.

Despite its relatively low numbers in the “body count” and “bullets fired” categories, Animal Kingdom is still a brutal and ugly cops-and-robbers flick, albeit one that is more closely grounded in reality than The Town , its closest American analog. Who would’ve thought a woman’s touch would leave us feeling so icky?