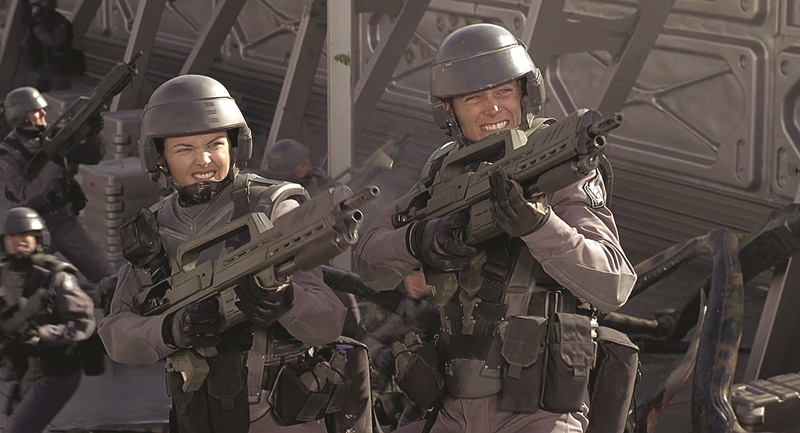 Years from now, we will tell our children about surviving the 2016 presidential election in much the same way our older relatives described enduring the Great Depression, Vietnam or dial-up Internet speeds. This cultural car crash, this feces-flinging sideshow, has exposed the very worst parts of America, from our media’s inability to actually do their job to the fact that we’ve got way, way more racists in the good ole USA than is acceptable … considering the acceptable number of racists is zero.

I can’t wish away this carnival of chaos, this foul fanfare of falsehoods and filth. But I can give you some things to watch to take your mind off of a political process that makes desirable the inevitable apocalypse towards which we are currently slouching. Here are my Top 10 (somewhat) underrated political movies.

In the halcyon days of 1998, Bullworth was a political farce. Given the rise of Donald Trump, it now seems like Nostradamus was in the writer’s room. Written by, directed by and starring Warren Beatty, the film follows a U.S. Senator who is losing badly in a primary race. So, obviously, he hires a hitman to kill him so his daughter can receive a life insurance payout. His death inevitable, the Senator goes loco for Coco Puffs and begins saying whatever comes to his mind, including a suggestion for racial equality wherein everybody should have sex with everybody until everybody is “the same color.” I’ll let you guess the results of the primary election.

Complete with references to a single-payer health system and arguably providing the “say whatever crazy shit comes to your mind” playbook for Trump’s 2016 campaign, Bullworth is sometimes cringe-worthy but bitingly hilarious and oddly prescient. It also has a great, totally underrated score by the great Ennio Morricone that nobody remembers.

Another “ahead of its time” gem, The Contender dares to dream of a world where there’s a woman in the White House. Well, where there could be a woman in the White House … as only the Vice President … if she can get through confirmation hearings that discuss her sexual past. The breathtakingly talented Joan Allen stars as Democratic Senator Laine Hanson, who is chosen by the President (Jeff Bridges) to be his new VP, after the sitting veep suddenly dies.

The Contender is a whip-smart deconstruction of the double standard that Hillary Clinton is currently living through. Questions about Hanson’s qualifications are reduced to her alleged involvement in a lurid collegiate sex party. It’s not quite the simple sexism of the “talk less, smile more” critique Clinton is besieged by, but it serves to expose the same mentality. It’s also sadly worth noting that this movie came out 16 years ago, and a woman in the Oval Office remains a work of fiction.

Written by, directed by and starring George Clooney, this dark tale could possibly make you feel better about the real world by comparison, provided you don’t think about how many real-life events likely inspired it. Young campaign hotshot Stephen Meyers (Ryan Gosling) discovers some super gross and bad things about Mike Morris (Clooney), the presidential candidate whose campaign he helps run. It’s one of those films where it turns out everybody is actually terrible and awful and nobody deserves to have anything good happen to them. Fun!

Oftentimes political movies, even ones that intend to serve as a critique, gloss over blemishes and flaws with a “feel good” ending or positive spin. The Ides of March does not. It is an unflinchingly grim condemnation of the type of people who largely populate our political system. Honestly, thinking about it now, it feels like the 2016 presidential election took this movie as a dare…

Spin doctor Conrad Brean (Robert De Niro) is tasked with distracting the public from advances made by the President of the United States towards an underaged girl. Literally, the only thing that could do that would be a war. So he invents one. He hires Hollywood producer Stanley Motss (Dustin Hoffman) to fake a conflict with Albania. Believe it or not, it gets weirder from there…

Yet another example of being “ahead of its time,” Wag the Dog can now be viewed in context of the alt-right conspiracy theorists who believe shit like this actually happens. The drooling mouthbreathers who think that Sandy Hook was staged and that Hillary Clinton is employing a doppelganger are the logical extension of the gullible public sent up in this satire. Guys, this list is making me more and more depressed.

The second Clooney-directed film on this list, the film tells the story of Edward R. Murrow (David Strathairn) and his fight against Joseph McCarthy. The film is intended to be a testimonial for the power of television journalism to fight against political fearmongering. This is depressing because fearmongering is now exactly what it is television journalists seem to do.

Despite fear of reprisal, Murrow’s assault on McCarthyism is hella inspiring. Compare this real story of a newsman risking everything to tell the truth with Matt Lauer’s inability to provide a single fact-check in the dog-and-pony political farce that occurred this year with Trump and Clinton. Actually, don’t. Don’t do that. You’ll just get sadder. I’m really making things worse, aren’t I?

It is now apparent that this has become a list of movies that express my deep discontent for our current political process. I’m just going with it now … V for Vendetta is set in a dystopian England under totalitarian rule. Basically, it’s utopia if you’re Vladimir Putin (or apparently Trump). A scar-faced, weapon-wielding anarchist (Hugo Weaving) and a young proto-revolutionary, Evey (Natalie Portman), must stand against oppression using every tool available, from knives to consonance.

I get that Michael Moore is a divisive figure and that even those with a liberal bias are wont to find him a wee bit irritating. This is probably his least controversial film, which is why nobody saw it. The conceit is pretty dumb: He “invades” countries to take their ideas. Essentially, it’s a whistle-stop tour of countries whose governments do some things better and smarter than ours. That’s really not hard to do, as we can’t even seem to pass a bill that funds protection against a disease (Zika) that’s mutilating our babies.

Fitting with my larger theme of being very depressed about the state of things, this documentary shows how easy it would be to put in place minor changes that could have massive consequences. These include stronger worker protections, education reform and remembering that women are profoundly brilliant and unfairly shunned from leadership positions where they could probably save all our stupid asses if we’d let them. Does that sound bitter? This list is making me bitter. I need something to drink.

I’m one of the few people who champion the shit out of this movie. Not only is Josh Brolin’s non-impression a glorious example of the way actors should tackle biographic roles, the film is a decidedly sophisticated take on a spectacularly unsophisticated public figure. In general, I’m fascinated by any document, fictional or otherwise, that attempts to keep alive the questions and issues surrounding that one time we went to war on a “whoops.”

I almost included The Green Zone on this list for that same reason, because it hammers home the point that questions about reasons why we went to war and killed thousands are the most important questions of all. And yet, the current election cycle has spun so far away from those issues that we have a candidate suggesting President Obama “created ISIS,” something that was a direct result of the actions depicted in W. Ugh, are you drinking yet? If you’ve made it this far on the list, you should really be drinking.

This may be a comedy, but don’t be fooled, it will still do the work that the rest of this list does and make you sad about the state of things. Jokes about corporations’ involvement in government and a hatred of science facts won’t make you laugh so much as cringe with how they’ve become so powerfully true. Go ahead and finish the rest of that drink, I’ll wait. I promise you, the number one movie on this list is not a downer. I at least saved one good thing for you.

Hell yeah, Starship Troopers! This gloriously violent, spectacularly weird sci-fi madness is an all-time favorite of mine and a hell of a political indictment. Right now, there’s a national discussion taking place that’s mostly focusing on the wrong things (go figure). Hopefully, you’ve been drinking, but stay with me. San Francisco 49er quarterback Colin Kaepernick has been staging a protest in defense of the Black Lives Matter movement and against police brutality in general. This has evolved to him taking a knee during a national anthem. Athletes in other sports, like Megan Rapinoe in soccer, and other football players have joined in. So we are all talking about the horrible injustices that are routinely perpetrated on people of color by the authorities, right? Nope! Tons of people are mad because this protest “disrespects the troops,” as though taking a knee during a song that includes a shoutout to slave murder is somehow anti-military.

The point is, Starship Troopers is a glorious ode to false patriotism, specifically to the abuses and propaganda that our brave men and women in uniform are subjected to on a routine basis. The film suggests that maybe the most patriotic thing to do is to not send military volunteers to die. Oh, and maybe we shouldn’t use their bravery to manipulate the public. In fact, if you listen to a large number of well-spoken, awesome vets, they describe Kaepernick’s protest as the very sort of thing they are proud to defend. This movie is at once a compelling indictment of rah-rah moronic faux patriotism and a hell of a fun time. In fact, I’m going to escape into a world where we’re fighting giant alien bugs and not the involvement of white supremacist groups into our national election, because giant alien bugs are way more pleasant.