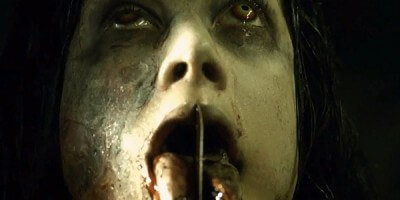 The plot is familiar.

The cast is not.

For Evil Dead (not to be confused with The Evil Dead, its 1981 predecessor), the formula is perfect. Although the film boasts the tagline of “The most terrifying film you will ever experience,” those wary of “terror” should have no fear; there’s enough camp here to keep you safe.

Those who are squeamish, on the other hand, should stay far away. Actually, better make that far, far, far away.  Seriously. Don’t even think about it. Guts and gore are to be expected in a film whose trailer features a French kiss with a razor blade, but it would appear as though director Fede Alvarez attempted to cover for the film’s below-average dialogue by covering everyone involved with as much blood as possible.  Sadly, the script is the most disappointing component, particularly because it carried the pedigree of Oscar-winning writer Diablo Cody. Then again, she did write Jennifer’s Body….

It’s not like the concept is built for originality anyway, this is literally a “cabin in the woods” horror film, where what passes for a story is “reading from a bad book makes bad things thirst for blood.” From there, it’s just counting down from five, the number of friends staying at said cabin. The script may lack, but the casting, gore and score pick up the slack. A cast of unknowns, with the exception of Jane Levy (TV’s “Suburgatory”), deliver sub-par performances; however, instead of destroying the film, the campy-ness is simply heightened. Thankfully, with fantastic comedic timing, Levy doesn’t take herself, or the film, too seriously. The rest of the cast appears invested in horror while Levy performs from the absurd; she’s the new poster child for cult horror.

Movie-goers longing for the color red: Evil Dead is the perfect film for you. Comparable to Tim Burton’s 2007 ruby-ravaged Sweeney Todd, Evil Dead uses fluorescent blood as opposed to more realistic scarlet. And those of you who are partial to your extremities…don’t get too comfortable. At the risk of spoilers, no more shall be said about the matter. Just be warned.

The biggest triumph here is, somewhat surprisingly, Roque Baños’ score. Without music, most films would cease to be interesting. But the mix of eerie piano melodies and high drama low tones here make for fantastic mood music. Although Alvarez could have easily opted for the growing trend of using dubstep in the background, he instead chose iconographic sounds, such as sirens mixed in with the musical tones, to cue moments the audience knows are coming…somehow causing them to jump anyway.

Evil Dead will not be nominated for an Oscar, unless “Best Supporting Gore” is a new category. Perhaps if it was marketed more for what it is, a potential camp horror classic, perhaps audiences would be more drawn to it. Regardless, it is always wonderful to see a big budget “horror” film create more laughs than screams. Who knew demonic possession could be this funny?