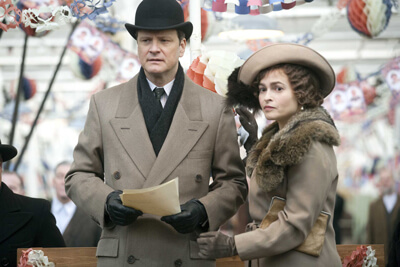 Remarkably unremarkable and tonally mundane, director Tom Hooper’s The King’s Speech was seemingly genetically engineered by a mad scientist named Juan Tan-Oscar. Quasi-historical and wholly predictable, the film would have been dismissible as icky chum for suit-wearing Academy sharks were it not for Geoffrey Rush and Colin Firth. Their tête á têtes are more frosty diction than Frost/Nixon , but the genuine skill of both restrained performers thaws the frigid pace enough to feel … something.

Firth plays Prince Albert, who is second in line behind his elder brother, Edward (Guy Pearce), for the English crown. Albert is smart, capable and married to a supportive lass named Elizabeth, played by Helena Bonham Carter, who somehow still manages to look like a deranged homeless witch even in royal costuming. Albert’s daddy, King George V (Michael Gambon), knows his days of throne sitting are nearing an end, so he starts tweaking out. Why? Well, because Eddy is obsessed with schtupping a married woman, a kingly no-no, and Albert has a speech impediment of Porky Pig proportions.

Having tried every recourse to help her tongue-tied spouse, Elizabeth finds one more man to potentially provide Prince Albert’s tune up. Lionel Logue (Rush) is a speech therapist and failed actor who comes from the “Robin Williams in Dead Poet’s Society ” school of inspiration. Combining unconventional methods that really don’t seem that unconventional and wacky exchanges that really aren’t that wacky, Logue and the prince become friends just in time for the prince to become king. But they’d better hurry with that speech therapy, because Hitler’s on the move, and only the new king’s radio address can rally England now!

Wouldn’t it be great if just once a movie like this ended with the big moment, ahem, royally sucking? You know, the dude trains for a big fight and gets clobbered; the girl gives the brilliant closing argument and loses the case; the king prepares to deliver a speech after months of practice and unleashes nothing but mouth farts and awkward pausing. Sadly, screenwriter David Seidler didn’t have this stroke of inspiration. Instead, things are so paint-by-numbers that improvisation was likely punishable by guillotine.

On the positive, Firth does a great stammer and stutter. What’s more impressive is that he makes the prince-turned-king into a real person so jam-packed with psychological issues he’s like Sigmund Freud’s piñata. Rush irritatingly isn’t afforded the same opportunity, as the early promise of an investigation into Logue, such as his obsession with acting and family dynamic, fade like sun-bleached wallpaper.

There’s nothing super wrong with The King’s Speech. It’s just one of those movies destined to be moderately acceptable to everyone and overly beloved by an easily impressed few. It has an undeniable date with multiple award nominations, as do Firth and Rush, and that’s really all Dr. Juan Tan-Oscar was shooting for anyway. Unfortunately, the gleeful cackling will be coming only from a secret mad scientist laboratory and not from theaters screening this shouldn’t-really-be-a-contender.