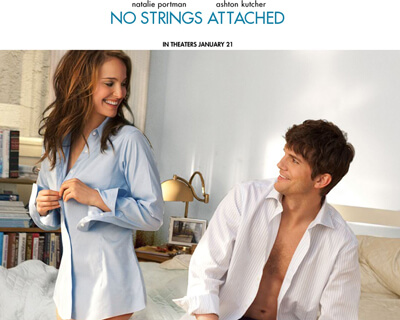 Director Ivan Reitman is best known for ridiculous, male-dominated comedies like Ghostbusters and Stripes , but his latest, No Strings Attached , is like a romantic-comedy masterclass. Not that it’s a masterpiece of the genre, but it so expertly strikes all the right nerves that it’s still a little irresistible.

One drunken night and one impulsive morning are all it takes to bring former acquaintances Adam (Ashton Kutcher) and Emma (Natalie Portman) into a relationship. Not that they’d ever label it as such. At Emma’s insistence, and in accordance with her exhaustive list of rules, they’re simply “friends with benefits,” and nothing else.

Their strictly sexual situation seems to take a lot of scheduling because Emma is a doctor and Adam works on a “Glee”-esque TV show, but everything goes fine at first … even after he’s fallen head-over-heels for her (he is a guy, after all, and she’s Natalie Portman). It isn’t until the hardline Emma’s feelings get confused that things really start to get complicated.

It’s the average story of a happily single woman fighting against and eventually coming to terms with her feelings of affection. And it really is a movie about Emma: Adam is a barely formed character, so much so that the most anyone is ever able to say about him is that he “has a good heart.”

No Strings Attached works, but not because it’s funny, surprising or particularly real. As in the old days of Hollywood, it works entirely because of its two stars, actors that folks of any sex or sexual orientation would be flattered to imagine themselves with. This movie was designed to do little besides amuse us and tug at our heartstrings, and the latter is something Portman and Kutcher seem able to do easily. And the two definitely have some good chemistry, although the fact that she’s a much more talented actor is blatantly obvious.

As for making us laugh … well, the jokes aren’t amazing, but the supporting cast seems intended to make up for that. Mindy Kaling (“The Office”) and Greta Gerwig ( Greenberg ) are well cast as two of Emma’s roommates, and rapper Ludacris isn’t terrible as one of Adam’s friends. But the real gem is Kevin Kline as Adam’s father, a sweet but ego-high ex-TV star who’s in the habit of dating his son’s ex-girlfriends.

One thing worth noting is that No Strings Attached takes place in the real world, or at least one that’s more real than the usual romantic comedy setting, where everyone’s rich and gorgeous. Here, everyone’s just middle class and gorgeous. Emma confesses that she works 80 hours a week, and Adam proudly states that he paid for his car himself, a surprise considering his dad’s wealth. Not much, but it’s a welcome improvement on the usual.

To put it plainly, we’ve all seen this movie before. Thankfully, Portman and Kutcher are able to freshen it enough so that if you liked it the first few times, you’ll likely enjoy it again.