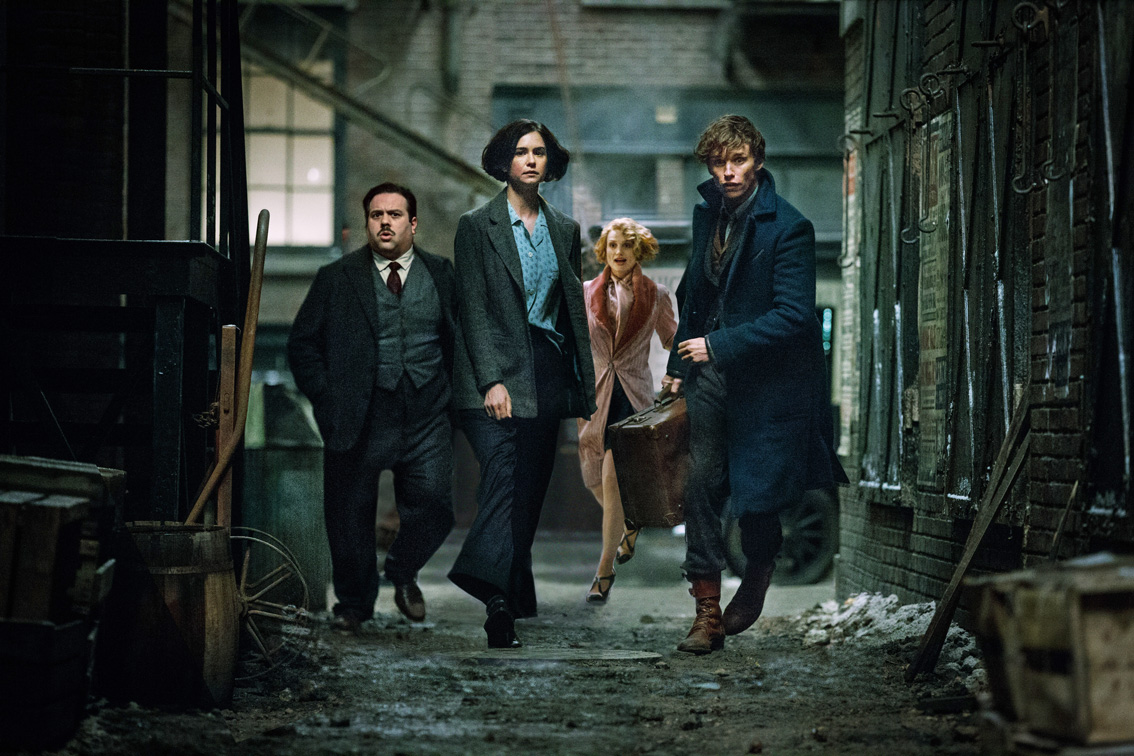 Here, in Trump’s America, the question is no longer “Why do bad things happen to good people?” but “Why do good people do bad, dumb things?” JK Rowling is a gifted author and a provably decent human being who has just done a bad, dumb thing. Fantastic Beasts and Where to Find Them is, fitting to its title, a goddamn monstrosity; it is a plot-free assault on goodwill whose franchise aspirations now feel like a threat to our pop cultural safety.

Nothing of consequence happens in Fantastic Beasts, but here’s what occurs while noises are made and lights are flashed: Newt (Eddie Redmayne) comes to America in the 1920s with a magic suitcase containing lots of crazy creatures. Some get loose. A Brooklyn mustache attached to a chubby person, Kowalski (Dan Fogler), helps Newt find said creatures with the help of Tina (Katherine Waterston) and her sister Queenie (Alison Sudol). Meanwhile, Graves (Colin Farrell) tries to get Credence (Ezra Miller) to help him do bad things, presumably because both are angry about their haircuts.

I swear to God, that’s all that happens.

Fantastic Beasts is one of those movies that confuses characters having traits for characterization. Kowalski makes donuts. Newt has mussed-up hair and poor eye contact. Tina…okay, so some of them don’t even get character traits. All of Rowling’s worst habits aren’t just on display; they are spotlighted and shotgunned into audiences’ faces. A threadbare overarching narrative about evildoers trying to expose the secret wizarding community (or something) is played out by the most yawn-tastic collection of disinteresting human beings.

Oh, and it’s racist. Yeah, like, blatantly racist. A black actress delivers lines that would be at home in the mouth of a “Mammy” figure from the heyday of openly racist cinema shortly before a jazz ditty is belted by a house elf that looks like Nina Simone or Billie Holiday. House elves, of course, are slaves.

And before anyone else suggests it, having an actress of color as the president of American magic, Seraphina Picquery (Carmen Ejogo), isn’t a counterbalance. Especially not when you consider how she gets almost every fact wrong and exhibits an enthusiasm for a near police state. To be clear, I’m not suggesting Rowling intended all of this. But I’m thinking this last month has been a testimonial in why no racist bullshit should go unchecked. Ever.

Fantastic Beasts has some pretty special effects. It also has a glowing-horned rhino thing that tries to sodomize a flop-sweat-laden New Yorkian stereotype. One of those things will stick with you longer than the other. The stakes are totally nonexistent, likely hanging out wherever the villain’s motivation pissed off to, and the relationships between the characters can, at best, be hailed as “scripted.”

Fantastic Beasts is an unnecessary installment of a beloved franchise that features a stupid caricature doing slapstick comedy, a repetitive villain, racist minor characters, poor acting and pretty special effects. So, let’s just call this what it is. I’m sorry Potterheads, you just got Phantom Menace-d.