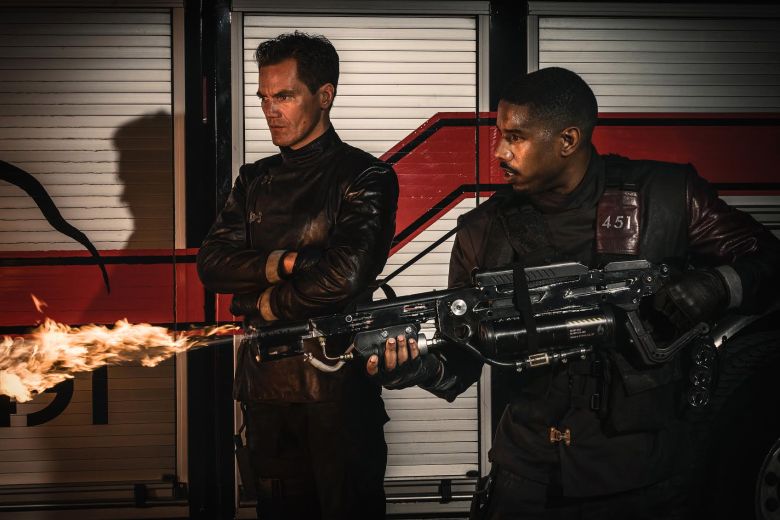 Fahrenheit 451 isn’t really an adaptation of Ray Bradbury’s classic science-fiction novel about a dystopian America where “firemen” burn books. It’s not even an actual movie. Fahrenheit 451 is just…footage? Calling a movie “unfinished” tends to be another way of saying that it is “sloppy.” However, this time I mean it. Fahrenheit 451 feels literally unfinished. Scenes seem to be missing, the same shots are used over and over again to stretch for time, and most of the dialogue is so poorly dubbed over that I can’t help but wonder if the sound guys didn’t have time to sync it.

I’m a little shocked Fahrenheit 451 was released as is. I don’t even know a good way to tell you what this movie is about because it never gives enough information. It takes place in futuristic Ohio sometime after a Second American Civil War, I guess? The “firemen” upgrade to mostly burning tablets so the movie can appeal to millennials. Young fireman Montag, who has no discernable characteristics other than being played Michael B. Jordan, is a totalitarian government’s lapdog until he pockets one of the few paperbacks in existence, without the movie ever hinting at why he would do such a thing. Eventually, Montag joins a resistance book club that’s going to save literature with bird sex. I’m guessing I need to read the book to understand the bird f**king thing, right?

Michael Shannon’s in the movie, too. He’s a diehard tablet burner who doesn’t know why he quotes literature and spends his nights writing poetry on rolling paper. With about twenty minutes left, Fahrenheit 451 drops this subplot entirely and simply moves on. This is what I mean by, “Scenes seem to be missing.” Shannon’s illegal writing goes nowhere. It’s a major part of the first two acts, but the third act stops addressing it. We never get the scene where it should come into play.

There’s also The Nine, the evil social media network that somehow connects everyone in Ohio. The movie never explains it beyond, “It’s a social media network. And it’s evil.” Am I forgetting anything? Oh yeah! “Yuxie” is the future-Siri that some people know is secretly recording them all of the time and other people don’t, for whatever reason. Look… I’m sorry if this review is choppy. At first, I thought about just listing the stuff I want to criticize. Fahrenheit 451 is so incoherent—so unfinished—that I really don’t know how to tie any of this together. There isn’t a completed thought in this entire movie. It’s all just things that happen to take place within close proximity. There’s no “bigger” story here.

This is the worst movie of 2018, so far. You know what? Screw the “so far.” Fahrenheit 451 is the worst movie of the year. I can’t imagine changing my mind by December 31st. I’ll tell you why I wrote this review that nobody asked for: Every now and then, I just have to write about a movie. It’s usually because critics missed something that I have strong feelings about. This time, I just came to warn you.