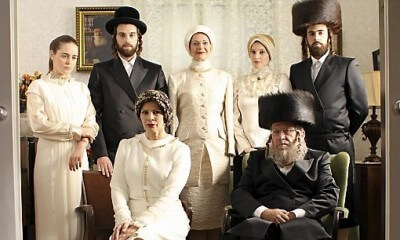 Holy Hasidic hot potato, Bat-mensch! Writer/director Rama Burshtein’s Fill the Void is an emotionally potent tale about the collision of individualism and tradition, complicated by amorous affections and familial responsibilities. Tightly woven, with nary a wasted scene to be seen, Burshtein’s film never fetishizes the ultra-Orthodox Jewish community it explores. She refuses to treat the community as a microbe dissected beneath a microscope while simultaneously presenting the complexities inherent to a community where a Rabbi’s word is law, where a woman is a freakshow if she don’t got a man and where devout faith is not synonymous with easy answers.

It’s actually a simple story: Yochay (Yiftach Klein) loves his wife Esther (Renana Raz), who is 9-months pregnant with his child. When she dies unexpectedly, her newborn survives, leaving Yochay with a bundle of joy in his arms and pain in his heart. In this world, he needs help with that baby, as he is ill prepared to raise it himself. When Esther’s mother and new grandmother, Rivka (Irit Sheleg), realizes Yochay’s best option to remarry would require him to move to Belgium, she comes up with an unconventional solution: She proposes that Yochay marry Esther’s 18-year-old sister, Shira (Hadas Yaron).

Shira is just so stinkin’ lovely. She plays the accordion, is kind to everyone and is excited to get married. Only she was thinking she was going to be matched with a man her age, specifically one horribly awkward fella with a beard patchier than an Eagle Scout’s vest. When that opportunity falls apart, Shira has few options. She observes that her unmarried friend Frieda (Hila Feldman) is more socially leprous than post N-word Paula Deen, “of course.” So with her mother pushing the union, Shira begins meeting with Yochay. And that’s where things get really complicated.

To state it cleanly: Fill the Void is a great film with great performances a great writer/director and a great understanding of how to pair universal emotions with an insanely specific setting. Yaron is a nuanced, subtle vision, and Klein matches her caged-emotion for caged-emotion. The best movies about relationships make you feel like you’re nervously watching a thriller or suspense film. Combine the claustrophobic setting with a life-changing decision hanging in the balance, and things become so romantically complex that it’s impossible to know what outcome to root for.

Even the title suggests the imperfect paradox facing all involved, invoking simultaneous loss and gain. Fill the Void is proof that you don’t need the threat of global destruction posed by CGI gizmos to create a sense of urgency and high stakes. Although statistics suggest that audiences won’t, by and large, have intimate first-hand connections to the Hasidic world depicted, the universality of torturous personal choice is enough to hook any viewer. Like Shira, the future of both Yaron and Burshtein is technically unclear. But an optimist’s heart will see this small, intimate endeavor as the starting point for two women with a considerable amount to offer anyone.