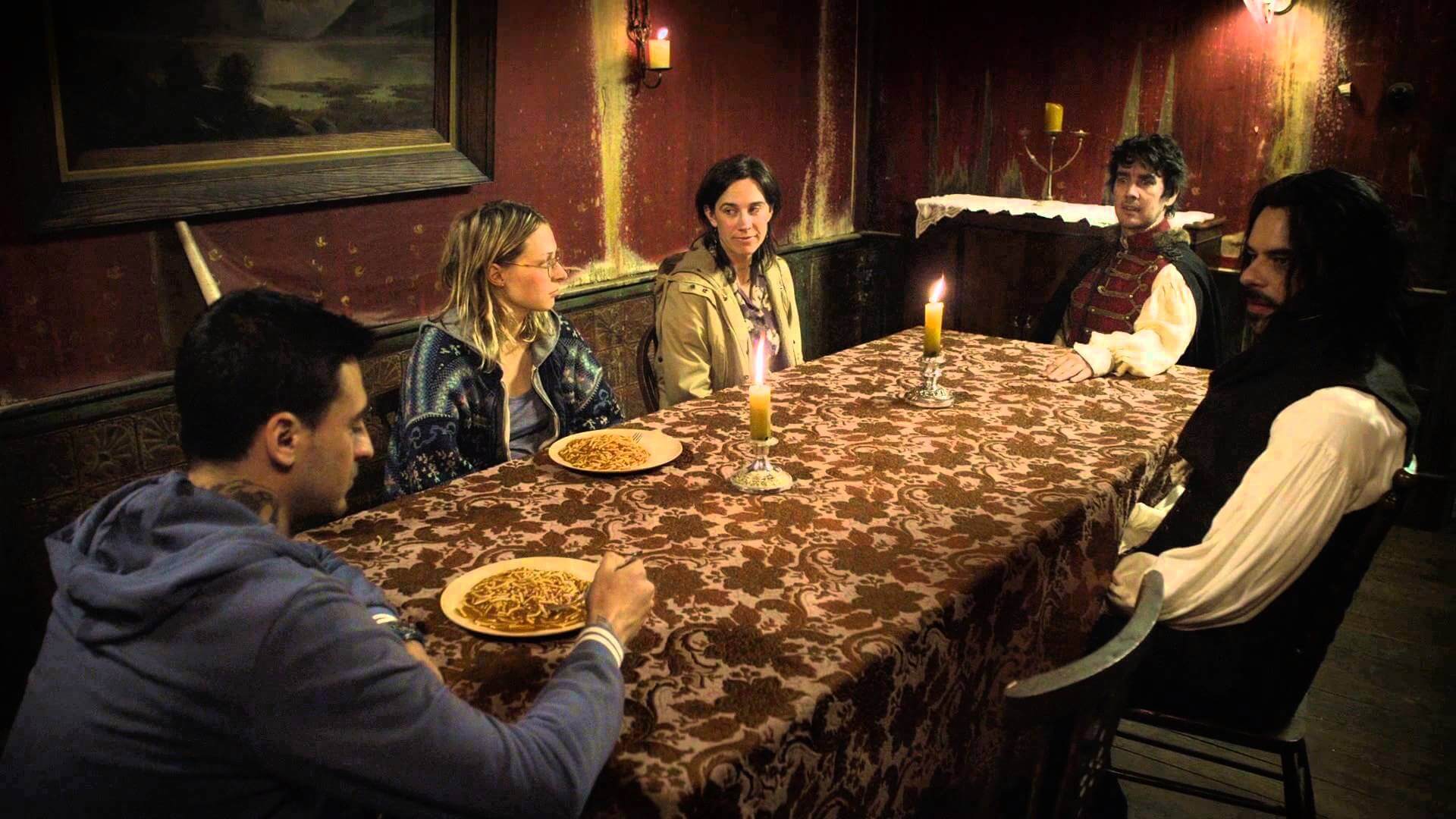 Food and movies go together like Mike and Ike or HPV and unprotected sexual intercourse, all four of which may actually go together if you remember certain ad campaigns. You know that any obnoxious hack who is desperate for clicks can put together a top 10 list of food-related movie moments because I did that last year. So this year, just like last month’s collection of weird music-in-movies categories, I have decided to explore the stranger aspects of the collision between cinema and cuisine, movies and meals, flicks and food.

Feel free to share your picks in these offbeat areas on Facebook (facebook.com/thereaderomaha/), Twitter (twitter.com/thereaderfilm) or email (film@thereader.com). I offer you no prizes or fame, but I will probably read them without wearing any pants, if that does anything for you. And now, here are some weird categories I made up!

Worst Meal in a Film

People eat a lot of disgusting shit in movies. And not just John Waters movies. From Indiana Jones to the guy who exploded in Se7en, choosing one stand-out, truly awful, big-screen meal is difficult to do. My solution? Choose a meal that’s bad in two different ways! Writer/director Taika Watiti’s What We Do in the Shadows is a brilliant bit of mockumentarying that should appear on far more “favorite comedies” lists than it currently does. And I check often. There’s a great scene where vampires use their low-level telepathy to screw with soon-to-be blood donors, convincing the meat-and-juice puppets that they are eating worms and not spaghetti. Here’s the thing, imagining worm slurping is gross. But seeing the canned noodles they’re actually eating isn’t much better. It’s a double-whammy of “not in my mouth.”

Most nonfiction films about food are designed to make you sad, angry or sangry, which is the feeling of wanting to drink sangria until you feel better about the state of the world. Jiro Dreams of Sushi doesn’t make you feel any of those things. Maybe the sangria thing, but that could just be a permanent state of mind. Director David Gelb’s short little ditty is a pensive, fascinating exploration of a man and the cuisine that has consumed his entire existence. Meditative and engrossing, this is the rare food documentary that will have you contemplating more than what’s for dinner.

Like everyone who ever saw a single moment of Buffy, we know that Sarah Michelle Geller is part divine. The part of her that isn’t made Simply Irresistible, the worst chef-centric movie ever, which is insane considering that Bradley “You Should Really Kick My Nuts” Cooper did one too. If you haven’t seen Simply Irresistible, it’s a special kind of 1990s terrible that we legally don’t let people do anymore. Geller plays some kind of food witch who gets one of the Boondock Saints fall in love with her. Do not watch this hoping “it’s so bad it’s good.” Sometimes it’s not chocolate ice cream in the cup.

Best Specific Meal From a Movie

Millions of people still believe that Ratatouille is the name of the rodent in the film. While Key & Peele had good fun with that, a better time is had by actually eating ratatouille. Again, just to be clear, I mean consuming the French dish with stewed vegetables and not nibbling on rat tails. Unless you’re nibbling on Shia LaBeouf’s rat-tail, in which case, bon appétit. I’ve tried cooking up several variations of the dish and actually prefer and highly recommend ones that include meat. Again, I don’t mean rat meat, but if you want to include Shia LaBeouf, bon appétit.

Best Movie With People as Food

I legitimately did not see a smooth segue for this one, but here we are. From Snowpiercer to zombie movies, there are a not inconsequential number of movies in which people are on the menu. Soylent Green may get all the press, but for my money, Titus is the best people-eatin’ movie to ever serve the most Swift-ianly succulent meats. Directed by Julie Taymor before Spider-Man turned off her dark, this Shakespearean adaptation features Anthony Hopkins back before he sold his soul for Transformers: The Last Knight money. Visually sumptuous and still pointedly applicable, this is one of my favorite bard-to-big-screen flicks and the best where people get eated up.

Movie Restaurant I Wish Was Real

I know that somewhere out there is a nerd or nerd-assembled site that will tell me if Mos Eisley Cantina served food. I care not for facts, as I wish instead to dream of a menu for the Star Wars bar entirely on my own. Would there be Ewok Bites? There would. You could also find Jabba Juice, Yoda Yogurt Parfaits and Boba Fetta Cheese Salad, which tastes fantastic but only in small portions. Although I’m certain someone has tried to replicate the experience of actually being in this intergalactic watering hole, if I could click my Sith high heels three times and wish for any place to be truly real, it’d be this wretched hive of scum and villainy.

Oh man do I want you all to tell me your favorite bullshit fast-food movie tie-ins from your youth. I want to share stories of exasperated parents destroying their gastrointestinal systems in service of the quest to acquire cheap superhero/Disney/inappropriately-non-kid-friendly movie toys at burger franchises. For me, it’s a tie between the Great Muppet Caper glasses from McDonald’s and the Lord of the Rings goblets from Burger King. Please do not do the math on the years between those releases to determine how sad it is that one man wanted to acquire full sets of both. Just know that, at some point, alcohol was in all of them.

While we’re talking about tie-ins, let’s talk about stupendously abhorrent product placement that, for some unknown reason, only served to delight me. As one of the few defenders of Power Rangers who didn’t star in or produce Power Rangers, I can tell you that I have no problem with the fact that the film’s climax hinges on a Krispy Kreme donut shop. Maybe it’s the look on Elizabeth Banks’ face—presumably the same one she has when her white feminism erases The Color Purple from her memory—when her villainess pronounces the location. Maybe it’s just that the film is chock full of the kind of good silliness that disarms any substantive critique. Who knows? I just know it was clunky AF, and I don’t care.

Underrated Snack in the Theater

I am one of the few staunch holdouts that generally detests the fancy cuisine served at far too many movie theaters these days. I mostly get popcorn. Because you eat popcorn at the movies like a person. That’s what you do. But if I were forced to choose another thing to put in my mouth while watching a movie in public, it’d be pretzels. Nachos sometimes get love, and everyone squawks about this candy or that, but a hot, salty pretzel has more hot twists and turns than a Chuck Tingle adaptation. I’m wildly against elaborate food consumption while watching a first-run film, but I’m radically in support of more pretzel choices in theaters.

Before the internet ruined everything imaginative about sexual fantasies forever, movies would routinely include weirdly suggestive stuff with food. I don’t miss it. My first thought was almost always “Well, now that it’s been in there, can they even safely eat it?” That’s not a thought you have during Sausage Party, the conclusion of which features one of the funniest and unholiest scenes to ever get its raunch on. Few scenes have ever made me feel so weird while laughing as the things that those sentient food stuffs are stuffing in an orgy that is, in a literal sense, undeniably delicious.