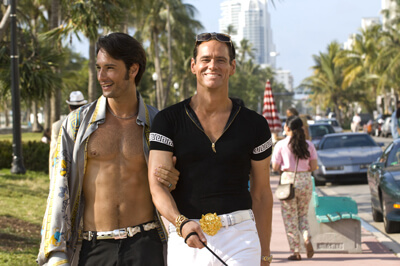 Jim Carrey has no damn luck.

I Love You Philip Morris is a darkly comic, gay Catch Me If You Can , the central role in which requires rapid fluctuation from slapstick pratfalls to wrestling with AIDS. It’s exactly the type of part that scores formerly big-time actors their marquee award nomination. If the film weren’t tonally disjointed, had more genuine romance and didn’t use a penis-shaped cloud as a narrative bookend a la Forrest Gump ’s feather, Jimmy C may have defied LL Cool J adage and called it a comeback.

Based on the wickedly weird real life of con man Steven Russell, Philip Morris sports a deliciously complex lead character. Russell is a family man, married to Debbie (Leslie Mann), and police officer who trades his existence in to become a gay punchline. He takes on a Latin lover (Rodrigo Santoro), wears clothing dictated by stereotypes and starts fraudulently using credit cards and other lowbrow swindles.

In the interest of fairness, let’s just assume that writers/directors John Requa and Glenn Ficarra’s adaptation of Steve McVicker’s book accurately depicts Russell’s descent into the pink, frilly borders of extreme gayness and that this wasn’t done for the miniscule laughs it affords. Moving from laugh-seeking to love-sharing, when Russell meets Philip Morris (Ewan McGregor) while in prison, two souls find their other half. Of course, Russell being a near pathological liar addicted to “living high on the gay hog,” can’t leave well enough alone, and after their release begins once more conning his way to infamy and imprisonment.

Philip Morris never hits the stride it stumbles to reach; Carrey initially plays things too broad, mugging and yukking his way along with a silly voice and disingenuous emoting. Maybe it’s not his fault; maybe Requa and Ficarra goaded him into it, but it destroys our chance to treat Russell as real. Thus, when his emotional rollercoaster with Morris plays out, we’re nowhere near as affected as we should be. And Morris is another problem, as McGregor’s sweet simpleton doesn’t exude the muse-like qualities Russell supposedly sees.

I Love You Philip Morris is never boring, highly original and marginally groundbreaking — in that using a gay central romance for both emotional weight and laughs is far from commonplace. Yet nothing feels quite right. The quirky never blends with the intelligence, which never blends with the performances. The result is a classic near-hit. Sorry, Jimbo, looks like LL still gets the last word.