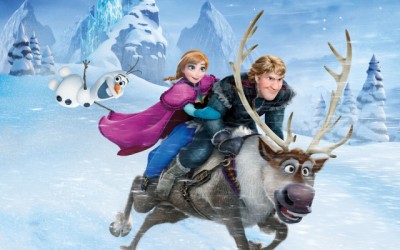 Dangling from the edge of Mount Treacly, overlooking the icy abyss of Cliché River, Frozen hurls a Bechtel rope and swings itself to safety in the nick of time. And just in case you miss the climax’s blatantly obvious flipping of established Disney gender roles, which mandates female-on-female violence prior to male rescue, there’s a joke about how a dude will like his new “sled” because “it’s got cupholders.” Oh, Frozen, you so hawt.

A menagerie of people assembled Frozen’s plot into icy stain-glass art from the broken glass of other stories, including Hans Christian Andersen’s “The Snow Queen.” Co-director Jennifer Lee is given sole screenplay credit, but whichever scribe blissfully ixnayed the expected “woman on woman” fairy tale savagery in favor of a largely villain-less experience deserves kudos and a kiss on the mouth. Probably both.

Frozen begins with Anna (Kristen Bell) and Elsa (Idina Menzel) playing together as children. Instead of playing make-believe, the kids roll around in Elsa’s ability to create ice like a friggin’ lady-sized sno-cone maker. When Elsa accidentally wounds Anna, she discovers that her powers will only grow more dangerous. So she is locked in the obligatory tower that all castle architects build “in case of daughter.”

Anna grows up believing her sister hates her, which is problematic when her parents meet the fate that befalls most Disney parents. On the day Elsa is made queen, her powers go wonk-city, and the whole kingdom is plunged into ice, so she bolts. Anna then goes on a quest to find her, with the help of the kind but reclusive Scandanavi-nerd Kristoff (Jonathon Groff), his adorable reindeer, Sven, and a talking, anthropomorphic pile of snow named Olaf (Josh Gad). True love is mentioned (and mocked), a life-saving kiss is pivotal (and subverted) and feminine bonds are extended to virtues beyond swooning at the right heaving bro bosom.

For the first time in…honestly nobody can even agree anymore, the songs in Frozen are all absolutely killer. No wonder; they were penned by the husband-and-wife duo behind “Avenue Q” and “Book of Mormon.” And while Bell’s adorably awkward Anna and Menzel’s kind-but-tortured Elsa are great, it’s Gad’s Olaf that steals the show. From a hilarious ditty about how much the snowman is looking forward to summer, since he’s never seen one, to his dim-witted slapstick shenanigans, Olaf is the supporting humor Disney has long tried to replicate by formula but couldn’t.

Frozen is a bit childish, but that’s okay. Its level of sophistication isn’t Pixar-ian, but that wasn’t its aim. This was an attempt to travel back to mermaids, little and beasts, beautiful. And by and large, it does just that. Also, a note to the honchos behind live-action, big-budget superhero movies: not only does Lee’s script not waste a lick of damn time providing some kind of “origin story” for Elsa’s powers, but The Snow Queen proves without a doubt a female with powers can absolutely work and resonate with audiences. Best get on that before audiences get cold.