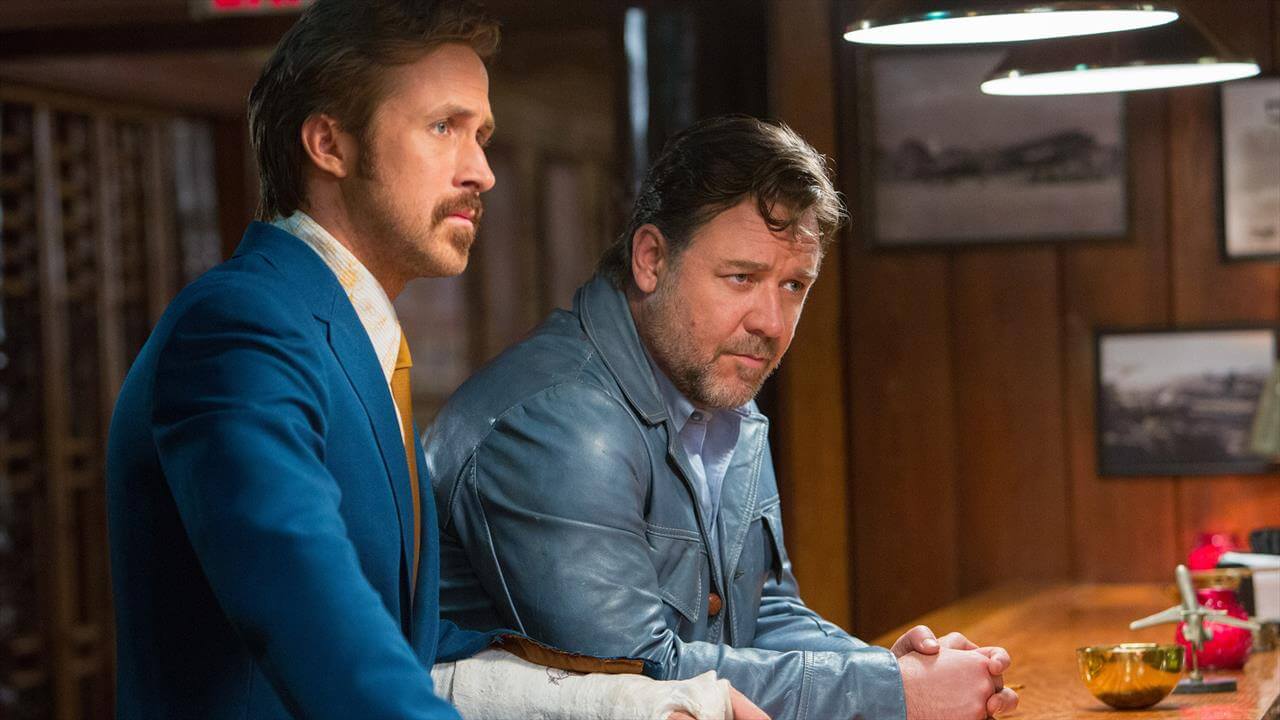 Sporting dialogue hotter than a recently spent shell casing and comedy slightly less dark than a necrophiliac stand-up comedian’s set, The Nice Guys targets a niche audience. Luckily, I am pretty much the captain of the populace living in said niche. Crudely clever and savagely stylish, writer/director Shane Black’s latest doesn’t quite equal the magic of his Kiss Kiss Bang Bang, but everyone knows Ryan Gosling is a poor man’s Robert Downey Jr and Russell Crowe matches Val Kilmer in girth more than in charisma.

The Nice Guys is classic film noir. Well, classic black comedy film noir. Well, classic Black black comedy film noir. This is to say it involves a private dick, a missing person, corrupt politicians and at least two great “I am a terrible person for laughing at this” moments. Set in the late 1970s, back when people paid for porn, Jackson Healy (Crowe) gets paid to hurt people. Not kill them or anything, just encourage different behavior through physical violence, which I only slightly kiddingly think should be a legitimate profession. Healy gets paid by Amelia (Margaret Qualley) to put the owie on Holland March (Gosling) for following her.

What Healy doesn’t know is that March is a private eye tracking Amelia as part of a case involving a dead porn star. When two kneebreakers subsequently come after Healy because of his contact with Amelia, March and Healy join forces to get to the bottom of things. Or “all the way to the top” of things, because that’s where these things always lead. With the help of March’s savvily precocious daughter, Holly (Angourie Rice), the only human in the film with anything resembling a moral compass, the slightly-douchey-detective-duo stumble, bumble and thwart a conspiracy that involves, no joke, catalytic converters.

First and foremost, the movie would be a trainwreck without the improbable spectacle of Gosling and Crowe’s chemistry. Crowe leans into his (allegedly) dickish nature whereas Gosling is so cemented in his status as cross-demographic sex symbol that he’s willing to generally embarrass himself to ridiculous excess. What’s more, Holly isn’t just a character central to the plot, she’s a running referendum on the moral bankruptcy of everyone around her. Black seems to have discovered a new trope, using Holly’s naivety here as he used a preteen boy’s to play off of Downey Jr’s PTSD-having hero in Iron Man 3.

The flaws here are (mostly) forgivable. Black still doesn’t quite know how to write women, even if he apparently knows how to write young teens. And while Black’s movies do follow patterns at almost all times, switch out a few details and this could be a straight-up remake of Kiss Kiss Bang Bang. That’s not a huge complaint, but asking to be measured against your best work isn’t always the smartest move.

That said, The Nice Guys opens the door for a whole series of films featuring this duo. And I want that. I want that real, real bad. I want to watch 100 more pulpy misadventures of these assholes. So, in short, yes: Black is back.