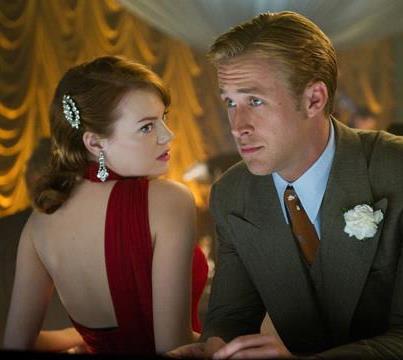 Nothing brings back memories of Sean Penn’s history as a serial domestic abuser like watching him revel in a man being drawn-and-quartered by automobiles. What a weird choice to take a cheesy, scene-chewing, 1940s mob-boss role at this point in his career. Cross-apply the same bewilderment to the decisions of Emma Stone, Ryan Gosling and Josh Brolin. Nick Nolte and Giovanni Ribisi? No, that seems about right…

Director Ruben Fleischer’s Gangster Squad should have drawn talent the likes of Nolte, Ribisi and Robert Patrick, but the influx of A-list talent like Stone, Gosling and Brolin is downright perplexing. Or, to put it in screenwriter Will Beall’s unnecessarily-stylish dialogue: “It’s a square deal, dollface; quit screwing up your peepers!” In an ideal world, this film is The Untouchables-lite; in the real world, it’s more reminiscent of the Christian Slater, Patrick Dempsey and Richard Greico life-changing opus Mobsters.

Penn plays Mickey Cohen, a real-life gangster portrayed here as a frothing goblin. Honest cop John O’Mara (Brolin) is told to recruit a task force to use “guerilla warfare” on Cohen’s mob operation. So he snags a sensitive bad boy (Gosling), a gunhand (Patrick), a smartypants (Ribisi) and a “man of the streets” (Anthony Mackie). While all characters are about as deep as a two-line casting call description, Mackie’s is borderline offensive. That is, if you find it repellant that the one minority character carries a switchblade and talks about “his streets” a lot.

Since her current “where-did-she-go” slimmed-down appearance suggests Gangster Squad may be the last time we see a healthy Emma Stone, it was nice of them to pour her into dresses with nostril-high leg slits. But while her rasp is perfect for 1940s era smoking culture, she isn’t given more to do than bat her still impressive eyes at Gosling while he gets “in too deep.” Oh, and the whole thing ends with a Lethal Weapon-esque boxing fight on a lawn filled with water. To crib from Mr. Inigo Montoya, when it comes to “based on a true story,” I do not think those words mean what you think they mean.

At its best, Gangster Squad is dumb-ass fun. At its worst, you’ll find yourself wondering whether Gosling is doing a bizarre high-pitched semi-lisp accent because he’s trying to keep himself entertained. The action set pieces don’t pop until a satisfactory ending, and it’s hard to care who lives and dies when our depth of knowledge on these characters consists of “that one likes science.”

One interesting thought: despite the fact that Gangster Squad is only slightly more historically accurate than Inglourious Basterds, it does remind us that America has had a “gun culture” since its inception. The evolution of the “wild wild west” into mob-controlled Los Angeles is a straight line. I don’t know that Gangster Squad actually makes any commentary about the significance of that; however, with entertainment being somehow pulled in as an equal partner with actual assault weapons as the root of modern violence, maybe it’s best to remember “Hollywoodland” was founded by shooting guns, it didn’t shoot movies about guns until much later.