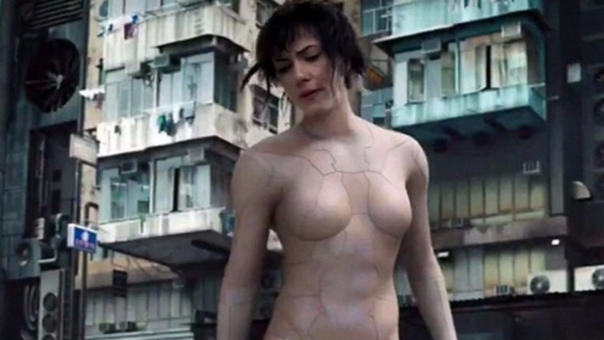 This review is dispatched from between a racist rock and a sexist hard place. It’s an oppressively joy-free place, and there are “Make America Great” hats everywhere.

Based on a beloved manga and adapted from one of the most revered anime films, Ghost in the Shell decided to honor its Japanese heritage by casting the decidedly non-Japanese Scarlett Johansson in the lead role. Not only did the studio engage in America’s real national pastime, whitewashing, it did so in a way that, should the film fail, it can be used as further fake fodder to “prove” women can’t carry big-budget blockbusters. It’s a lose-lose scenario for everyone involved! Especially anyone who actually sees this leaden, derivative horsepucky.

Johansson is Major, who is Robocop without the buoyant personality. She’s a robot body with a human’s brain inside, like a reverse Al Gore. She has no memory of her past but is told she was the victim of a terrorist attack and that implanting her consciousness inside a machine was the only way to save her. She is “the ghost in the shell.” If you didn’t immediately assume that was what that phrase meant, don’t worry; somewhere between 90-95% of the dialogue is some variation of “you’re like a ghost…in a shell.” Major is determined to find a bad-attitude-in-a-trench-coat named Kuze (Michael Pitt) and recover her memories. That’s it, folks. A nekkid robo-solider without any discernible personality stalks a pouting turd whose name sounds like either “cozy” or “koozie.”

Director Rupert Sanders has crafted one of the most elegantly self-absorbed, vainglorious examples of why remaking certain projects is a terrible, horrible, no-good, very bad idea. Sanders has publicly defended the whitewashing, presumably because that’s easier to defend than the content of his uninspired pile of rehashed sci-fi visuals. Without succumbing to the strong urge to spoil the conclusion, it can be safely said that the “truth” behind Major’s identity comes with jaw-dropping colonial overtures that Sanders seems horrifyingly cavalier about.

To shift from the tragic racist garbage to the unfortunate sexist elements, Johansson’s undeniable charisma and underappreciated nuance is smooshed into a monotone character given no room to breathe. That may be literal, as it seems impossible for her to have inhaled while wearing the flesh-colored robot spanx they encased her inside. Instead of adding to the list of iconic sci-fi warrior women, Major is inert and boring.

But make no mistake, the failure here is not on Johansson. This is on Sanders and writers Jamie Moss, William Wheeler and Ehren Kruger. Hey, here’s a thought: Maybe mix in a woman in the writing team for your female action movie? Maybe stop whitewashing behind the camera too and hire a Japanese screenwriter or director? Maybe even a female Japanese screenwriter or director? Because we’ve seen the dystopian landscape filtered through the American dude lens. It looks like Blade Runner every goddamn time.

The vibrancy that could come from a new perspective, and the commentary that could have been made about the forced detachment from and external ownership of female bodies, could have been essential and interesting. Instead, we get a Ghost in the Shell that feels like white fratboy 20-somethings adapting a movie they loved when they were 14. Boo.