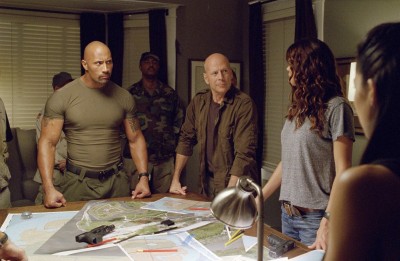 GI Joe: Retaliation’s script is so horrible, it should be in MoMA. Just like some people can’t stop staring at the world’s ugliest dog, this screenplay is fascinatingly hideous blather. It’s entirely possible the whole script was verbs: “shoot, explode, stab, scream.” Nobody expects Sorkin-esque dialogue from a franchise whose most popular character is a mute ninja, but it would be nice if it wasn’t total drooling nonsense.

We begin “in media res,” which is Latin for “what the hell is going on?” It’s worth noting the cinematographer was actually just a shaky washing machine with a camcorder duct taped to it. From what we can gather, the squadron of amazing soldiers with stupid codenames is sent to retrieve a rogue nuke. Only it was a setup by the president (Jonathan Pryce), who isn’t really the president but a terrorist wearing a “nano-mask.” We’re not at the dumbest stuff yet.

All the “Joes” get killed, even Channing Tatum, proving his rock-hard abs aren’t technically perfect because they aren’t bulletproof. Three Joes dive into a really convenient well in the middle of the desert and survive. These three are Roadblock (Dwayne “The Rock” Johnson), Lady Jaye (Adrianne Palicki) and Flint (D.J. Cotrona). You may ask “what’s a D.J. Controna?” The answer: the Guinness World Record Holder for “Least Screen Presence.” The survivors reunite with their ninja (Ray Park), because every team here gets a ninja or two, and proceed to capture the not-really president before he blows up the world. Oh, and Bruce Willis shows up for like five minutes as the original “GI Joe.” You can tell he loves America because if he types in the password 1-7-7-6, his house turns into Ted Nugent’s wet dreams, with guns in the stove, guns in drawers, guns in the closet and a goddamn army assault vehicle in his garage.

And that’s way more coherent than the film actually is. Characters switch sides without explanation, then switch back again, but were only faking. The two most evil terrorists in the world aren’t killed but are kept in underground dunk tanks. And COBRA’s main plan involved satellite doomsday devices, which they built self-destruct mechanisms into. Worse yet: other than the “ninjas on the mountain” scene shown in every trailer, everything else is indecipherable shooting recorded by a camera that fell out a car window.

It’s never outright boring and super short, so as far as cinematic injuries go, it’s just a flesh wound. Hell, in the right light, it’s actually kind of funny. Watching a serious military man pin a medal to a ninja in full costume wearing a high tech motorcycle helmet while somber music plays is arguably the funniest scene in a movie so far this year. Even the rebels in Star Wars couldn’t bring themselves to give Chewbacca a medal, but apparently the U.S. government embraces ninja diversity. These are the kind of thoughts you’ll have, as GI Joe: Retaliation doesn’t have any of its own to share.