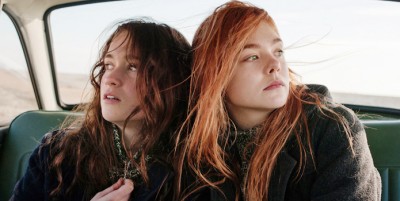 To come of age when the modern world was doing the same had to feel profound. Children of the 1960s could turn teenage rage against causes of substance, like blossoming nuclear culture. The teenagers of today celebrate their sexual and intellectual emergence with angry tweets about Instagrammed food. But hey, it’s not like there’s some unjust war or nebulous ongoing foreign conflict to channel their hormonal frustrations into…

Ginger & Rosa is a yin-and-yang “girl in progress” film. The tender-hearted but still childlike Ginger (Elle Fanning) isn’t exactly stunted by her long-suffering mother (Christina Hendricks) and douchey philandering father (Alessandro Nivola), but she’s not quite running toward adulthood with a full gait. This is, of course, in contrast to Rosa (Alice Englert) who has already colored her sexual prowess in numerous shades of grey. The two have been friends literally since birth, when their mothers practically had them in a synchronized diving routine.

Set in London, the girls are surrounded by a host of vibrant intellectuals, including Bella (Annette Bening), Mark (Timothy Spall) and Mark Two (Oliver Platt). Their philosophical patter is the film’s way to remind us of the significant backdrop, like a running ticker at the bottom of the screen flashing the words “remember it’s the cold war!” Because spoilers are a personal preference, look away if you don’t wish to find out what happens when the Lolita-in-training Rosa winds up staying with Ginger and her dad, a man who gives in to sexual impulses like celebrities and athletes. This sex bomb drops right as Cuba is penetrated by Russian warheads. And it is endearing and honest to question which event is more significant to a teenage girl to whom nuclear Armageddon may be less soul crushing than confronting the transgressions of her bestie.

Of the many things to love in writer/director Sally Potter’s film, the primary one is honesty. The very nature of conceptually linking potential doomsday to the over-inflated perception young people have about personal crises is a virtual masterstroke. So too is the decision not to make the main character the nubile youth in sexual bloom. The patriarchal obsession with fetishizing the carnal passions of young girls negates the authentic feelings that comprise the experience for most, which are a combination of fear, excitement and confusion.

It helps that Potter has a hell of a cast. When Benning and Platt are background players, you’ve done something right. In this case, that thing is casting Elle Fanning, who’s quickly moving from “Dakota’s sister” to “the” Fanning girl. Her vulnerability never feels calculated; her acting gift is an inability to be disingenuous. Even Englert infuses her role with more than the usual uncomfortable erotica. This isn’t to say the film doesn’t have its problems, with a wonky second act and an overreliance on treating the powerful social backdrop as a plot contrivance. But seeing as how complex female-created cinematic explorations of honest progression to adulthood are, Ginger & Rosa’s faults are easily forgotten.