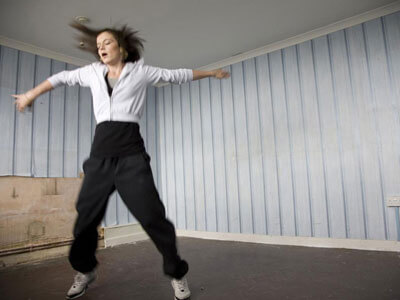 If Miley Cyrus were around 12 times as edgy as her calculatedly smutty videos suggest, Mia Williams (Katie Jarvis) would still eat that priss for breakfast and put a cigarette out on her eye. With a tongue that links staggering expletives into a nonstop chain of filth, Mia is 15-year-old trailer-trash living in an Essex estate in not-so-great Britain. Dispelling the concept that the oversexualization and emotional torment of tweens is a purely American phenomenon, writer/director Andrea Arnold’s Fish Tank is a gut-wrenching sucker punch composed as a painstaking character study. It’s realistic cinema dynamite of the sort that doesn’t explode near often enough.

With a mother (Kierston Wareing) who makes maniacal pageant parents look downright admirable, Mia dresses like she just rolled a homeless man who was convinced he was a 1980s breakdancer. Troublemaking and unloved, Mia has an affinity for hip-hop dancing and cheap booze, harder traits that protect a broken heart. When she sees a sickly horse chained in a trailer park, she repeatedly risks life and limb in an attempt to free him, unaware that doing so would probably kill him. She can’t think that far ahead; she only knows that sad, unwell creatures shouldn’t be caged.

When her mother brings home yet another boyfriend, Connor (Michael Fassbender), things get complicated. He’s no saint, content to get coital with Mia’s ma in cramped quarters, but his seeming good nature makes him near Godlike to a child unfamiliar with the smallest kindness. When he begins encouraging Mia’s dancing and starts speaking to her as though she has value, the confused kid can’t filter her feelings, blending gratitude for any kind of affection with her nascent sexuality … and Connor envisions himself as powerless against that pull. From there, it’s a slow burning fuse torching its way towards a horrifying kaboom.

The sophistication of Arnold’s artistry is comprehensive, from the way she deploys bursts of slow motion and harsh shadows to her willingness to let her actors smolder and not burst into hot, obvious flame. Jarvis is breathtaking; she is delicate broken glass, as capable of violent slicing and slashing as she is softly beautiful. Moving from youthful innocence to wise-beyond-her-years heartbreak in the space of a scrunched-up glare, she is a talent who should not be forgotten. Fassbender is also key in a troubling role requiring enough charisma to power through some truly staggeringly icky choices. Even Rebecca Griffiths, who plays Mia’s younger sister, is one tiny toddler powerhouse. This complete cast dominance is but one reason why the film won top honors at this year’s BAFTA Awards (“the British Oscars”).

Fish Tank is captivating and harrowing simple drama at its finest, borrowing its brilliance from the sort of unpleasant reality that’s easier to ignore. As uncomfortable as it is exceptional, it isn’t a “cautionary tale of youth gone wild” like Catherine Hardwicke’s Thirteen so much as a sophisticated glimpse into an intimate hell. Wherever Jarvis and Arnold go next, there’s no question it will be a place worth visiting.