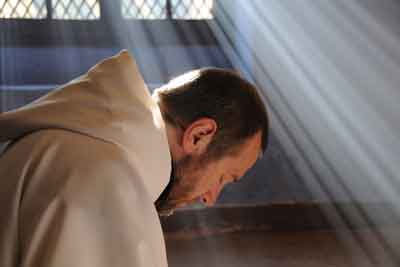 Although Of Gods and Men, a dramatization of the fate of Trappist monks in a civil war-torn Algeria in the mid-‘90s resonates deeply with recent history in the Middle East, its power and scope is much broader than that. French director Xavier Beauvois and co-writer Etienne Comar combine themes of colonization and rebellion, poverty and corruption, terrorism and pacifism into a riveting, yet eloquent portrayal of the human condition. But despite the global issues at stake here and their current implications, most viewers are likely to be moved even more by its spiritual and philosophical tension in this extraordinary film. Religious sects, their leaders and orders can impact a culture in several ways. It can be done with missionary zeal, preaching and coercion or by simply setting an example of sacrifice and service following in the footsteps and guided by the principles of their founders. The latter was the case of the eight monks of the French monastery Tibhirine that served a small village in the Atlas Mountains. Though the fate of the Trappists caught between the terrorist rebel forces and the corrupt Algerian government has been well-documented, the circumstances of their kidnapping and death at the hands of the former remain a mystery. Of Gods and Men, as the title hints, deals more with spiritual issues than secular ones, particularly in terms of who and what one serves in their brief time on earth. The Trappists face hard choices knowing that to Muslim fundamentalists — especially the jihadist revolutionaries that threaten them — they represent a long tradition of foreign occupiers that began with the French themselves. Although the monks are not interested in conversion, let alone occupation, they must decide whether to stay the course and serve their mission at a time when villagers need them most at the risk of their own lives, or flee to serve another day. Director Beauvois humanizes this struggle by letting us in on the private lives of each of the eight monks as they go about their daily lives of making honey, farming and caring for the medical needs in the village. But the director does this at a respectful distance, especially when they are at daily prayer or chanting in the chapel in several of their rites and rituals that unite them in their beliefs. Slowly, individuals emerge as characters and personalities as they serve their community but especially so as they debate their “options,” facing inevitable rebel revenge and violence. Two standout performances include that of Michael Lonsdale as the gentle, long-suffering doctor who humbly serves more than the medical needs of his patients and Lambert Wilson as the group’s stern yet empathetic leader aptly named “Christian.” Christian carries the weight of his world on his shoulders on behalf of so many factions, politically and spiritually, but not before learning a lesson in humility from his fellow monks on how best to lead. In a debate over whether to go or stay as violence increases and edges closer to their doorstep, they gently remind Christian of the importance of letting all have their say and listening to all viewpoints. Two key scenes, the first a catalyst, the second a catharsis, set the stage for the climax and denouement that follow once the monks make their awful decision, thus sealing their fate. The first occurs when rebel forces first come to the monastery demanding medical supplies. Christian stands his ground in the film’s most suspenseful moment in front of leader Ali Fayattia (Farid Larbi) and quotes from the Koran that acknowledges the presence of Christian priests and monks. Fayattia’s reaction is stunning and a revelation, but it does not alter the inevitable outcome later. Knowing this, the monks sit down to an improvised “Last Supper” as they clearly demonstrate that they are not hermits leading a merely ascetic lifestyle. As they break bread and enjoy two bottles of fine red wine, they listen to strains of Tchaikovsky’s Swan Lake with visages of quiet resolution and beatific vision. If the above scenario doesn’t break your heart then perhaps the film’s final shot of their last wintry walk at the hands of the rebels into a snowy oblivion just might. Knowing that they have already given up their lives as we know it doesn’t make their death any easier. Of Gods and Men is playing at Film Streams, 1340 Mike Fahey Street through Thursday, May 26. Visit filmstreams.org for more information.