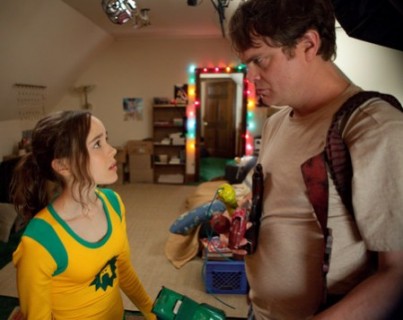 As snot bubbles billow and pop while tears trek down his moon-pie face, Frank D’Arbo (Rainn Wilson) wails to God, demanding he be told why the divine creator cursed him to be so oddly shaped and socially inept. Then, about five minutes later, he has a vision in which tentacles come out of the wall, bind him to the bed and cut off the top of his head so that God’s finger can touch his brain, giving him the idea to become a powerless, crime-fighting vigilante known as The Crimson Bolt.

Yep, Super is super weird. It’s also peerless, inspired entertainment. Roger Ebert, who unfairly and too cavalierly dismissed writer/director James Gunn’s indie flick, described the work as spiraling into “narrative anarchy.” Only Ebert somehow said that like it was a bad thing. The fact is, Gunn’s genre-bending, flagrantly disturbing dark comedy is perhaps the first truly original entry into the superhero genre since … well, maybe ever.

Although two other films, Defendor and Kick-Ass , labored beneath the “what if someone really tried to be a superhero?” motif, they did so in a way designed to comment on comic book-based movie tropes and themes, pointing out the shortcomings of the genre. Super , however, is all about the shortcomings of the audience, those who have never considered what their twisted fanaticism is capable of condoning and creating.

It all starts with Frank, an embarrassingly coiffed, doughy diner chef who somehow managed to get bangin’ hottie Sarah (Liv Tyler) to marry him, largely because she’s a recovering addict. When Sarah falls off the wagon and into the waiting chin dimple of Jacques (Kevin Bacon), a low-level drug lord, Frank spirals into the darkest of dark mental places. Wallowing in self-pity and flop sweat, Frank experiences the aforementioned tentacle-based epiphany of superheroism.

Suddenly unwilling to accept the brutal inequity of modern living, Frank becomes The Crimson Bolt, a tactless defender of justice who mostly just hits people in the face with a pipe wrench for crimes ranging from molesting children to cutting in line. Because Frank is pretty stupid, he inadvertently suggests his secret identity to a seemingly sweet but odd girl named Libby (Ellen Page), whose fan-girl proclivities result in her forcing her way into the role of Boltie, the Crimson Bolt’s “kid” sidekick. This is all played for sizable laughs; even when Libby’s gleeful embracing of violence rears its head, the film still feels like the darkly comedic indie gem that was promised. And then, almost without warning, things take a turn for the shockingly grotesque and violent. This isn’t just one isolated scene, as Gunn unleashes his horror movie background via an extended torrent of carnage.

This “narrative anarchy” has been called disorienting and disingenuous. The former is true, but the disorientation is welcome in a genre known for its predictability and dogged devotion to classic themes. The latter is not so true, as the tonal shift is not disingenuous, it is well earned. Libby represents the lust of fans for “realistic” comic movies, and the gut-churning violence that occurs after she joins up with Frank is nothing more than Gunn giving those fans exactly what they claimed they wanted … albeit dialed up to 11.

With the help of phenomenal turns by both Wilson and Page, Gunn forces an admission from his audience that there is an underlying depravity to the very concept of vigilantism we’ve popularized. And somehow Gunn and crew manage to deliver this unique, challenging notion while still squeezing gut-busting laughs from staggeringly uncomfortable places.

Never shooting for wide release, Super is available right now through On Demand and Pay-Per View services, meaning jaw-dropping originality and complex storytelling is just one click away.