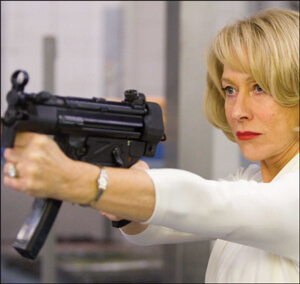 Wry sense of humor, sly sexuality, potent and visually stimulating violence? Oh, Ernest Borgnine, is there anything you can’t do? Okay, fine, although the 93-year-old gap-toothed thespian pops up infrequently in Red , a film for which all those previous descriptors do actually apply, his inclusion is a metaphor for the inexplicably kinda-awesome ha-ha/bang-bang extravaganza as a whole. Populated with a cast familiar with a time when ensemble was king, oozing charisma from their aged pores, Red is the anti- Social Network : The script is meh, the concept is as haggard as the lead actor. This proves once more that although words are king, actors can be gods. Let’s start at the top. Bruce Willis, fresh off not appearing to have aged in more than a decade, is Frank Moses, a retired C.I.A. black ops agent currently bored out of his gourd and obsessing over Sarah (Mary Louise Parker), the lady who answers his phone calls regarding his pension. Just as Frank is about to launch “Operation Get Me Some,” he is ambushed by a squad of assassins. Frank nabs Sarah both for her own protection and because he never abandons an operation and begins searching for answers. Frank’s first stop is at a nursing home to talk with 84-year-old former-spy-turned-stage-4-liver-cancer-patient Joe (Morgan Freeman), who can still kill you with a Bic pen. Joe gives Frank a list of names that leads him to Marvin (John Malkovich), a retired operative whose drug-addled brain should be a wake-up call to current real-life starlets. Constantly pursued by good-guy-conned-into-doing-bad-things, Agent William Cooper (Karl Urban), Frank also enlists the aid of a wily Russian (Brian Cox) and a slinky silver-haired sniper (Helen Mirren) before embarking on a rather ambitious final gambit filed under “only in implausible movies.” That implausibility is actually the best thing that screenwriters Jon and Erich Hoeber culled from the source material, a graphic novel (the politically correct term these days for a comic book) by Warren Ellis. Although we are all willing to believe Willis will be a physical marvel capable of death dealing throughout his Depends era, Red is one of those stupidly awesome flicks that also sees no need to capitulate to the laws of physics or reasonable decision making. It’s a “domino movie,” where each tiny plot point limply falls into the next one: it’s only fun when viewed as a whole. Thankfully, Robert Schwentke was thinking big picture with his treatment of his uber-cast, with loosey-goosey directing that acknowledged the biggest weapon in the film was the collective nuclear bomb of charm. Try not to have fun while Willis and Malkovich are hamming it up, or when Mirren and Cox are gettin’ their dirty flirty on. Even Urban, by far the spring chicken in this out-to-pasture collective, delivers the goods, notably in a wicked fight scene with his elder, Willis. With a dose of uninventive but still giddy-goofy-fun visual shoot-’em-up and a heaping helping of old-school actor elbow grease, Red is a surprising nugget of entertainment. It will be quickly forgotten, but as the cast knows, memory isn’t everything … they just can’t remember what is. Grade: B