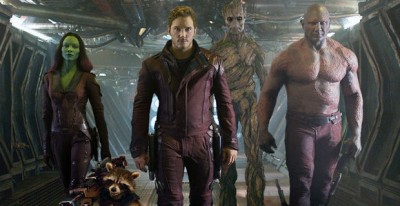 The proliferation of comic book movies has reached its cultural apex, so thoroughly dominating the box office and public consciousness that a backlash was practically invited. While the public plays Oliver Twist, wallets open and begging for more, those who critically engage cinema have begun the “tsk, tsk”-ing and the “poo-poo”-ing. Guardians of the Galaxy is a feast for the former and a rejoinder to the latter. It is unabashedly exuberant and a reminder of the satisfying splendor of spectacle.

Also, there’s a talking tree and a murderous raccoon.

Writer/director James Gunn’s gleeful and giddy space opera gets right to it, as young Peter Quill is abducted by aliens shortly after watching his mother succumb to cancer. Fast forward and Quill (Chris Pratt) is now an intergalactic scofflaw being hunted by people looking for an artifact he pilfered. Said pilfering earns him a bounty on his head, which the talking raccoon, Rocket (voiced by Bradley Cooper), and the semi-talking tree, Groot (voiced by Vin Diesel), attempt to claim by capturing the scoundrel. They arrive at the same time as Gamora (Zoe Saldana), who is also after Quill. The foursome brawl and wind up in jail.

Once incarcerated, they are confronted by Drax (Dave Bautista), whose nickname is “the destroyer,” which is pretty much the worst nickname a guy you confront in prison can have. Seeking vengeance against the would-be planet-killer Ronan (Lee Pace), Drax joins the awkward collective in an attempt to find his enemy. Quill’s rag-tag band of green ne’er-do-wells and anthropomorphic lower life forms accidentally find themselves the last thing standing between Ronan and the destruction of the known galaxy. No pressure.

Gunn and cowriter Nicole Perlman blatantly rely on a MacGuffin, in this case a powerful stone, to move events along because they understand that the film’s success doesn’t rely on plot intricacies. Instead, the script is slavishly dedicated to its characters, all of whom are either spectacularly original or, in the case of Quill, so flinging-flanging charismatic nobody cares. Sure, Gunn and Perlman probably have the gang vocalize their feeling of kinship for each other one or two…dozen times too many. But how do you not feel warm inside watching the bulky Drax keep telling people they are his friends?

If Boyhood is a reminder of film’s potential to be groundbreaking art, Guardians of the Galaxy is a testament to its capacity for inducing pure joy. To elevate one approach over the other is to cut the medium off at the knees. We need Boyhood to challenge us. And we need Guardians to make us feel like a kid again.