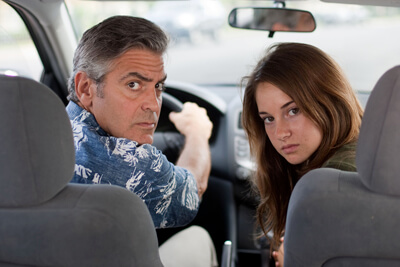 However you feel about Alexander Payne’s work, the cinema landscape is richer now that he’s back with his first feature since Sideways. That’s certainly the consensus among reviewers who’ve seen his The Descendants.

The September 10 premiere of the comedy-drama at the Toronto International Film Festival launched the George Clooney vehicle as a must-see this movie season. The screenings in Toronto, where Payne, Clooney and co-star Shailene Woodley appeared, came one week after a press sneak preview at the Telluride Film Festival.

The next big splash comes in October, when The Descendants will be the closing night selection at the New York Film Festival. Payne will be there. It is reminiscent of how his much-lauded Sideways and About Schmidt scored major points at prestige festivals. He will accompany his film at festivals in London, Honolulu, Greece, Turin and Dubai.

Shot in Hawaii in 2010, the film is Payne’s faithful adaptation of the Kaui Hart Hemmings novel. Clooney’s Matt King is a father-husband forced by circumstance and legacy to face some hard truths, such as his dying wife having cheated on him. This rude awakening propels a journey of revenge and reconciliation.

Payne again teamed with Sideways cinematographer Phedon Papamichael and worked for the first time with Clooney, Woodley, Beau Bridges and Robert Forster. Given Payne’s record and the talent surrounding him it’s no surprise the project’s getting big love, or that his return is being warmly embraced.

Though an old hand at the dog-and-pony hype of festivals, and the hype of awards shows, it’s been awhile since he’s been through the media grinder.

So, what is it like to unveil your precious creation to the expectant film world? He answered that and other questions by phone from Toronto the day after his picture was accorded a standing ovation there.

“I guess you feel a combination of panic and calm,” he says. “Panic, in that people are going to see it for the first time and you really hope it works. And calm in that, well, there’s nothing I can do. I’ve already done the work and it is what it is, and it’s ready to have its own relationship with the public. Now it belongs to the ages.

“So it’s panic, morbid curiosity and relief. And the fact that it’s been well-received both at Telluride and here … the big feeling is relief. When a film is well received it doesn’t bring me profound happiness necessarily, but it calms my nerves.”

In an out-of-sight, out-of-mind industry, Payne’s relative absence since 2004 amounts to an eternity. “I personally never think about that, only when all the reporters ask, ‘Why’s it been so long?’ and I say, ‘Well, because I’ve been busy; I had a bunch of other stuff going on. It’s not going to be that long for the next few. I’m going to go quickly now from film to film.” He may begin shooting Nebraska, his black and white, father-son road picture, as soon as spring 2012.

Meanwhile, Payne is paying attention to reviews. But in an era when, as he puts it, “every Tom, Dick and Harry is an online film critic,” he’s selective about whose criticism he reads. He prefers “the old standby critics,” by whom he means figures like Todd McCarthy of The Hollywood Reporter. “I respect him, he’s a real film guy. He’s a cinephile. And I do care what he thinks,” Payne says. “I’d like for him to like it. And I like Leonard Maltin. I like good critics, I want anyone to tell me what I’m doing wrong and what I’m doing right so that I can keep learning.”

For the record, McCarthy called Descendants “one of those satisfying, emotionally rich films that works on multiple levels.” Maltin termed it “an exceptionally fine film.”

Payne’s familiar enough with what’s been written that he says, “Some film journalists suggest, ‘It’s like your other work, it has a certain combination of comedy, pathos and following the journey of a flawed protagonist, but somehow this one has more acceptance and less condescension,’ which I personally have never aspired to. But anyway they think it’s more open-hearted and nuanced.”

His production company, Ad Hominem Enterprises, acquired the novel before it was published, but not for Payne to direct. He eventually saw it as a project for himself, then rewrote the script by Nat Faxon and Jim Rash.

Did Payne’s life catch up with the emotional arc of the story?

“It could be,” he says. “I think if you’re trying to do sincere and honest work, then the work you do corresponds somehow to where you are in your life. It has to. I do know that an emotional anchor that kind of made me want to do it are two acts of love or forgiveness in the novel. When Clooney’s character decides to track down his wife’s lover, he wants to kill the guy, but tells him she is going to die imminently. He just reckons this guy would want to know. That’s an act of love.”

“And then later at the end, when the lover doesn’t show up but his wife does, and she says, ‘My husband was too cowardly to come and that didn’t seem right — I thought someone from my family should come.’ It’s also an act of difficult love. And I thought those would be nice to represent.”

“I’m just always drawn to material that remains human and devoid of contrivance, that stays on the credible human plain. I try to somehow explore, express and mock the human heart.”

He says a friend who saw the film “enjoyed having a constantly shifting relationship” to the coma-stricken Mrs. King, who is variously an object of love, hate, pity and indifference — both for the other characters and the audience. Similarly, the story often shifts from comedy to drama and back again.

“One thing I witness with audiences is what someone described as hairpin turns in tone. That within a scene you can be laughing one moment, crying the next and then laughing again. A couple journalists asked me about that and how it’s accomplished and of course I have to say, I don’t really know, but I do think life is like that. Life has laughter and drama all going on at the same time.

“So I don’t really see hairpin shift in tone but rather a thicker tone or fabric of life.”

During the Toronto screening at the Elgin Theatre, Payne says he was a portrait of nervous energy. He began the night seated in the middle of the house, then went to the back to request the sound be raised. He watched from the rear, then moved to the balcony. He asked for another sound spike — before finally returning to his seat. All the while, acutely aware of how the film played.

“I just make the films, I don’t really know what they are until I watch them with an audience. It’s just interesting to see how this one functions and what I think I can do better next time and what I think works pretty well this time around …”

As for the marketing, he calls the trailer “OK,” but acknowledges this film, like his others, is hard to summarize. “You just have to see the film.” How Fox positions it is beyond his control. “The studio, I trust, is going to do a great job. I completely trust in their greed.”