Home » Film » Hair of the Dawgs 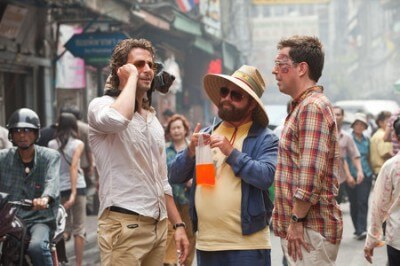 A working theory: There is no script for The Hangover Part II . There is only a script for the first Hangover with white out on some of the verbs and nouns. After their first unabashed gross-out out-grossed all other comedies ever made, writer/director Todd Phillips and writers Craig Mazin and Scot Armstrong dropped a deuce on such pedestrian concepts as “originality” and “character development” in favor of flat-out replication. There’s giving the people what they can expect in a sequel, and then there’s The Hangover Part II : a love song to lazy, recycled screenwriting. But if you listen, you can almost hear the trio of so-called creators belching out a collective question. “Are you not entertained?” Dammit. Yes. Yes, we are. The Hangover Part II is funny. Stupid funny. Unrepentantly funny. The kind of funny that a movie this devoid of any effort has no business being. And before you go thinking “devoid of any effort” is too harsh, consider this synopsis. Phil (Bradley Cooper), Stu (Ed Helms), Doug (Justin Bartha) and Alan (Zach Galifianakis) get together in Thailand for Stu’s wedding to Lauren (Jamie Chung), who is so beautiful that her union to affable everyman Stu may be the most unbelievable part of a movie that involves a smoking, drug-pushing monkey. Two nights before the wedding, the gang gets together with Lauren’s little brother Teddy (Mason Lee) for the proverbial “just one” beer and wake up the next morning in Bangkok with no memory. They must check their pockets for clues about the previous night, endure the reckless, genital-exposing antics of Mr. Chow (Ken Jeong) and find their missing friend before the wedding. Sound familiar? Even with the characters’ incredulousness that they would be involved in another such affair, including Phil’s cheeky meta-acknowledgment that “it happened again,” it’s hard to totally forgive the duplications, which extend to the maximum-perversity photo montage over the credits. Or at least, it would be hard if it wasn’t for all the laughter…which has long been the remedy to cure writing ills. So why is it still gut-busting to watch this crap again? The answer comes by comparing the film to a superior one: Bridesmaids . Bridesmaids is a clever, well-penned film populated by passably real characters and full of often genuine emotion. By contrast, the subhuman pig-men that populate The Hangover movies are whacked-out caricatures devoid of morality, relative or otherwise, and completely incapable of feigning normal human emotions. Even the “good one,” Stu, does some really, really unspeakable things. Thus, the pain and suffering of these freakshow ne’er-do-wells is therapeutic. You can laugh guilt free at these cinematic voodoo dolls, rejoicing in their being repeatedly stuck with the pins of unfortunate circumstance. It’s not smart, new or inspired…but it is pretty funny. On a sheer laugh-to-laugh comparison, Bridesmaids still smokes The Hangover Part II , even out-grossing the dude-led sequel. But give this follow-up its due: Somehow, some way, they made the same jokes funny…again. Which is a fancy way of saying we pretty much know what The Hangover Part III is going to look like. Grade = B+