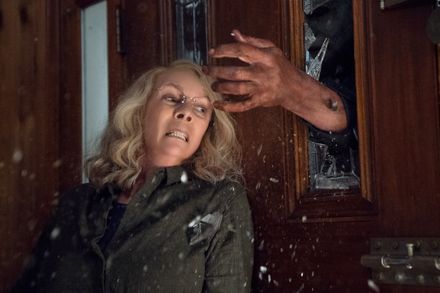 Maybe “sophisticated” isn’t the right word for a movie in which a woman shimmies along a poo-covered gas station bathroom floor in an attempt to flee from a maniac who just threw human teeth at her. And yet, from conception to execution, Halloween is a masterclass in thoughtful schlock. An often tongue-in-cheek slasher-film romp, it is also a surprisingly effective meditation on the intergenerational burden that women face in educating their daughters on the horrors of certain men. It’s also now the best movie William Shatner’s face has ever appeared in.

Writers Jeff Fradley and Danny McBride (!) along with writer/director David Gordon Green have hopefully issued in a new era for remake-reboot-sequels by opting to simply pretend all the shitty Halloween sequels never existed. Speaking of keeping what works and getting rid of awful things that don’t, please vote on November 6. Green and company’s approach may seem a bit “no-duh,” but it actually demonstrates a substantial trust in its audience, upon which the final act’s significance hinges.

Set a real-time 40 years after the events of the first film, the murderous Michael Meyers rots in a mental institution until he’s visited by two podcasters on the eve of his transfer to a different asylum. Obviously, he breaks loose and begins putting knives where they definitely do not belong. Laurie Strode (Jamie Lee Curtis), the heroine who survived his first rampage, has always known this day would come.

Laurie has spent the last 4 decades turning her house into an escape room sponsored by the NRA. She also sacrificed her relationship with her daughter, Karen (Judy Greer), by obsessively preparing her to fight against a man with the worst of intentions. Karen’s daughter, Allyson (Andi Matichak), sweetly yearns for more time with her gun-totin’ granny. Her wishes come true on October 31, when Meyers once again turns his murderlust on Laurie’s lineage. What starts as an orgy of 80s horror cliches slowly reveals itself to be escapism for those surrounded daily by feminist fears, turning the tables against a faceless, universal representation of toxic masculinity. Only the Strode family’s lack of intersectionality prevents metaphorical perfection.

How many movies feature a nearly 60-year-old woman as their tough-as-hell lead character? How many pieces of pop culture deliberately avoid sexualizing their heroines? Judy Greer hilariously kicks ass in a Christmas sweater in a movie called Halloween. The film is even savvy about its gore. The body count may be split fairly evenly between men and women, but Meyers’ murders are largely asexual, and the most awful business is reserved for douchey dudes.

Halloween can easily be superficially gobbled up as wickedly fun throwback horror. But unlike pretty much every slasher film in the history of ever, it gets considerably better the more it’s mulled over. Forgoing the stale “final girl” trope in favor of a conclusion that values women sharing lessons and strength with other women, Halloween is pulp terror goodness and one helluva treat.