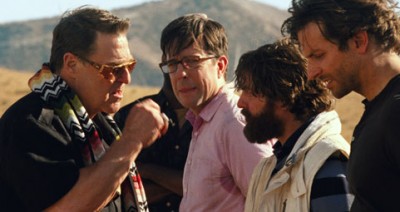 The Hangover Part III is so jaw-droppingly terrible, America deserves an explanation. Not because this series has become some nation-defining work of art, but because it sure feels like writer/director Todd Phillips just told everyone who likes his films to go “make sexytime” to  themselves in the most unpleasant of orifices. It isn’t merely unfunny, as unfunny would have been a heaven-sent upgrade. This film plays like depraved fan-fiction used as therapy, in which Phillips gets the last word with critics by flinging poo at them.

The criticism levied against The Hangover Part II was redundancy. Stunningly, the objection wasn’t to the increasingly abhorrent behaviors of Phil (Bradley Cooper), Stu (Ed Helms) and their reluctant friend, Alan (Zach Galifianakis), who is a walking, talking cry for mental health help that people laugh at because of obesity and hair growth. The opening scene is Phillips’ first response to detractors: we see Mr. Chow (Ken Jeong) escape from a Bangkok prison, which indicates a very different tone.

On the way to take Alan to rehab, because emotional retardation is apparently cured at Betty Ford’s Clinic, the gang is stopped by a criminal boss named Marshall (John Goodman), who abducts Doug (Justin Bartha) and tells the trio they must find Chow. The reasoning for this would be laughable but all laughter has been outlawed here. The so-called “Wolfpack” hunts for a minor character incapable of doing major plot work and, along the way, mutilate and kill many animals.

If that last sentence raised your eyebrows: congrats on holding on to basic human decency! In what is clearly a response to PETA’s criticism of the “smoking monkey” character in the last movie, Phillips beheads a giraffe and smothers a rooster to death with a pillow. Later, when two dogs are drugged, seemingly spared the fate of their brethren, we’re told that Chow went back and snapped their necks. Because nothing says comedy like killing pets, am I right, Mike Vick?

If Phillips was attempting to indict his characters and their fans for their willingness to accept darker and darker debauchery, then he isn’t a bad person, he’s just bad at what he does. The end product wasn’t some stroke of genius like the “Seinfeld” finale, in which the morally vacant are held accountable; instead, this is just a laugh-free swim in a sea of deplorable behavior.

Don’t worry, they still find time to show Jeong’s exposed genitals one last time. That Jeong has such a huge role is proof no one understood what made the previous films work. Just like the Cookie Monster now describes the food for which he is named, Ken Jeong is only a “sometimes food.” He works only as a bizarre contrast in small doses; too much will cause diabetes or kill you.

The Hangover Part III is easily the worst film of the summer and the frontrunner for the year’s title. As it turns out, being redundant is far more entertaining than being original when your “original” idea is a swirling supernova of suck.