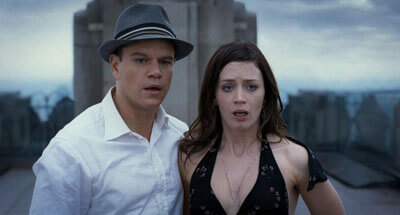 Although he doesn’t get name-checked, the Almighty plays an invisible supporting role in The Adjustment Bureau , the first Philip K. Dick short story adaptation to morph from science-fiction to theology-fiction. Despite the illusion of crushing doom promoted by the dour, oppressive orchestral music in the trailers, writer/director George Nolfi’s fable is actually a sweetly simple, cross-demographic romp. Charmingly clever until it tries to be full-on smart, this level of competence still feels fresh during the pre-spring doldrums.

In the biggest acting stretch of his career, Matt Damon plays David Norris, a budding politician from New York, not Boston. The youthful would-be senator has his campaign derailed when voters find him too juvenile to elect after photos of him mooning his classmates at a college reunion. In a film that features quasi-angels manipulating fate, the least believable element is that voters were turned off by Damon’s exposed posterior.

Rehearsing his concession speech in the men’s bathroom, David is delighted to meet the shoeless Elise (Emily Blunt), whose spunky personality and noteworthy cleavage raise the downtrodden candidate’s spirits. He promptly delivers a breathtaking address that puts him right back on the map … and then never sees Elise again. Well, that was the plan anyway. When a chance encounter on a bus reunites the two, the agents of fate are called in.

God apparently has a “Mad Men” fetish, as representatives of “the Chairman upstairs” are dressed like 1960s extras in trench coats and fedoras and are dispatched to separate the lovebirds. Gifted with confusing powers — they can predict mortal decisions, provided there isn’t water around, and get their powers directly from their hats — these imposing figures attempt to keep things moving according to “the plan.” Philosophical discussions of free will and fate bubble and pop alongside a remarkably believable love story. Not too shabby for entertaining mainstream fare.

Blunt and Damon are the anti-Jolie and Depp, with audiences likely flinching from the visible sparks between them as opposed to cringing when they were contractually obligated to touch. The remainder of the cast mostly belongs to the hat-wearing, magic dude club, including John Slattery, Anthony Mackie and Terence Stamp. Although clearly adversarial, they seem more bummed out to be peeing on true love than delighting in their interference.

Nolfi’s finest creative moment was deciding to ditch an aura of creepy in favor of a decidedly endearing tone. When Damon argues against Stamp or Slattery, it never turns into “good versus evil” so much as it feels like a conversation shared by many a stoned duo, albeit more eloquent. This isn’t to say the stakes don’t feel big, only that the thrills have a lower-case “t.”

With charming-as-hell leads, a creative conceit and cleverness abounding, even a hackneyed, predictable ending can’t derail the entertaining ride. The Adjustment Bureau is delightful, interesting and pleasant; it’s further proof that original ideas can provide the same level of crowd-pleasing, widely appealing entertainment as sequels.