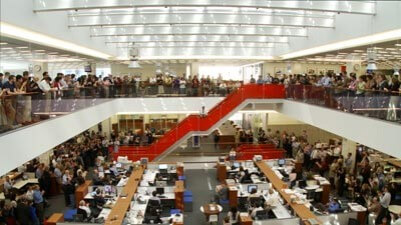 I won’t feign objectivity. Although director Andrew Rossi’s documentary Page One may center on The New York Times’ ongoing fight for survival, it’s more than that. The film is a snapshot of the collision between new media and mainstream journalism…with the latter as the bug, and the former as the windshield. Because there’s a chance you risked smudging your fingers to read this review, you know where I stand.

I stand with reporters like David Carr, a gravel-voiced warrior of the written word and the central character in Page One. Carr’s body bears the scars of hard living; he’s skeletal and moves with uneven, spastic motion thanks to a long-since-kicked crack addiction. He’s the hero here, repelling the enemy advances of a horde of new media mavens looking to feast on the flesh of “the establishment.”

Except, as the film reveals, this “establishment” is not some faceless empire hellbent on biased reporting and feckless tidbits to raise circulation. It’s composed of skilled editors like Bruce Headlam, a relentless fact-checker, and quality writers like Brian Stelter, who started his career as a blogging boy wonder only to join the most notable icon of media days of yore.

These are people who dedicated their lives to an ideal of journalistic integrity and necessity that is declining in popularity faster than New York Times’ subscribers. In the final act, one that centers on newspaper layoffs, the violent melee between ideologies explodes. There are those who won’t be satisfied until all mainstream outlets, not just the old gray lady, are felled by the sword of social media and citizen journalism.

I despise the arrogance and narcissism of traditional media members who wield implied credibility almost as much as I loathe those of the new breed who naively believe all information is equal and should be cost free. I don’t pretend to be a high-minded journalist. I just review movies. But I’d like to believe that a decade of experience and oversight by trained professionals means my material has more value than a Facebook post that says “Green Lantern sucks.” Yes, traditional outlets must continue to evolve, using all tools available. But journalism is a proud profession we ought not let go extinct.

But I digress. Page One may not resonate with everyone like it did with me, with its slightly erratic narrative backbone that never flows fluidly chronologically or logically. But give it a chance and listen to folks like Carr eloquently and passionately state what I semi-bumbled my way through here. After all, he’s a professional.