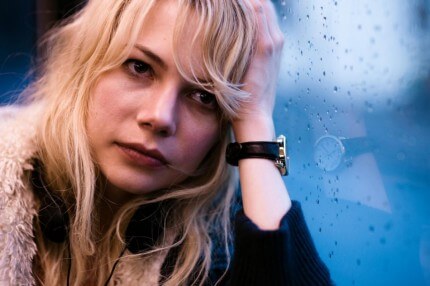 Last year’s indie relationship flicks mostly kept the mood light. Both Jack Goes Boating and Cyrus tempered their weighty moments with socially awkward central characters who were good for a tension-breaking chuckle. Viewers loved these characters at arm’s length, not because they weren’t real or wonderfully crafted, but because we like to think of ourselves as too sophisticated to make the kind of relationship goofs they made.

Conversely, Blue Valentine offers no such escape. It offers two options — commit wholeheartedly to its characters, both of whom seem to reside to some degree in all of us, or disengage completely and grumble about Ryan Gosling’s tough-guy accent.

Blue Valentine is the story of Dean (Gosling) and Cindy (Michelle Williams). Dean is a loving father and musically-inclined high school dropout who seems content to underachieve. Cindy works as a nurse, having had to scrub her aspirations to become a doctor after getting pregnant in college. To grossly oversimplify the characters, the principle difference between the two seems to be that Cindy’s dreams and aspirations are still alive and life’s “what ifs” weigh on her heavily, whereas Dean seems content painting houses and being a husband and father.

Desperate to rekindle the flames of their cooling relationship, Dean arranges to drop their daughter Frankie (Faith Wladyka) off at Cindy’s father’s house. The two then run off to spend a drunken night together in the sterile spaceship-themed “future room” of a seedy motel.

Scene by scene, we watch as the final gossamer strands of their relationship snap like the strings of Dean’s ukulele. Juxtaposed against this painful-to-watch disaster are scenes from the couple’s beginnings, as the two earnestly fall in love. The tenderness of their meeting and the viciousness of their ostensible parting are a startling contrast.

In this film, rooting for the underdog is an exercise in futility; both characters are equally flawed. Whether they stay together or split up, both are doomed to long, unfulfilling workdays followed by mac and cheese dinners consumed out of Tupperware. Adding emotional weight is the presence of an innocent child who loves both of them dearly. And that’s kind of where the audience ends up in this mess as well — hoping both of them can work this out, but unsure of who to follow when the two go their separate directions.

Cross-cutting Dean and Cindy’s warm back story into their relationship problems was a stroke of genius by writer/director Derek Cianfrance. This elevated the film from a one-note, depressing take on modern marriage to a love story. As always, Gosling does great work, but it’s easy to see why Williams was nominated for an Oscar for her portrayal of Cindy. Despite coming off as a less sympathetic character, Cindy is infinitely more complicated and nuanced, and Blue Valentine is arguably her story.

Blue Valentine’s biggest flaw is that, after 112 minutes, the ending feels too abrupt, leaving us wanting more. This is not the result of poor pacing. Instead it’s a testament to the characters’ resonance. And that’s a good thing.