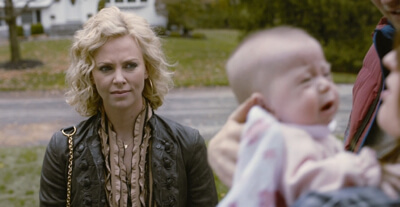 Even if you don’t feel you really know the main character in Jason Reitman’s Young Adult, you’ve probably seen her. Maybe at the grocery story, or in a gas station. She’s obviously very pretty, even though she’s disheveled, with baggy sweatpants on, and remnants of last night’s makeup visible behind the grimace and the big sunglasses.

In this movie, Charlize Theron plays one such girl. And Reitman uses his film to speculate on what life might be like for her, in much the same way as he did for the anonymous airport-dweller in 2009’s Up in the Air.

Mavis (Theron) was a star in high school, and as an adult has found a way to avoid growing beyond it. Living in Minneapolis, she’s the uncredited author of a series of young adult novels, successful stories about boys, breakups and high school politics. But the series is now coming to an end and Mavis is starting to lose her grip, though she’d be the last one to realize it. A random email from her old high school sweetheart, Buddy (Patrick Wilson), sends her back to her hometown.

The idea is to whisk the happily domesticated Buddy away from his wife and newborn daughter, simply by force of her looks and “big city” refinement. Back home, she runs into a former classmate named Matt (Patton Oswalt), known to her as the “crippled kid” since, thanks to a rumor that he was gay, he was brutally assaulted and left disabled back in high school. Matt does his best to convince her of the sad absurdity of her plan, but she’s as oblivious to reason as Buddy is to her advances.

Young Adult doesn’t seem good for the first half-hour or so. Everything is almost too awkward, too uncomfortable, which starts to make sense when we realize that we’re seeing everything through Mavis’ insecure eyes. Which means that she ends up being the butt of every joke, especially her own. All the cracks she makes about the town and its lack of sophistication, whether she verbalizes them or not, can only be seen through the prism of her own relentless snobbery.

And it should be said that if one were to simply dismiss Mavis as a spoiled, deluded soul this would be an unbearable movie. What’s important isn’t the verdict we’re able to render on her, but the things we’re able to learn from her. Even if she’s an extreme case, most will find something in Mavis that they can recognize in themselves.

Up in The Air showed a man making a vague discovery about himself and then left him there, the implication being (for an optimist, anyway), that he might now be able to move forward. Young Adult gives Mavis a similar moment of clarity, and then actually shows her delight in finding a way to avoid it. The wrong interaction at the wrong time (a chat with Matt’s Mavis-worshipping sister Sandra, played by Collette Wolfe), gives her not only a quick ego high, but a full line of logic she can use to dismiss all the previous night’s revelations.

The way Diablo Cody’s writing and Rietman’s direction have matured for this picture is amazing. Their last collaboration was 2007’s Juno, which was, at best, a precocious, self-consciously “indie” blip on the radar. Theron deserves loads of credit for Young Adult too of course, proving once again that her talent doesn’t depend on the kind of massive physical changes she underwent for her Oscar-winning turn in Monster. She’s just as much of a monster here, and remains the most stunning figure on screen.

Young Adult is a rare movie – a truly adult picture with a mass appeal, a comedy that realizes the depths that can be reached by pulling no punches. It’s the sort of movie we can expect to see more and more of, as long as guys like Reitman stay on the scene.