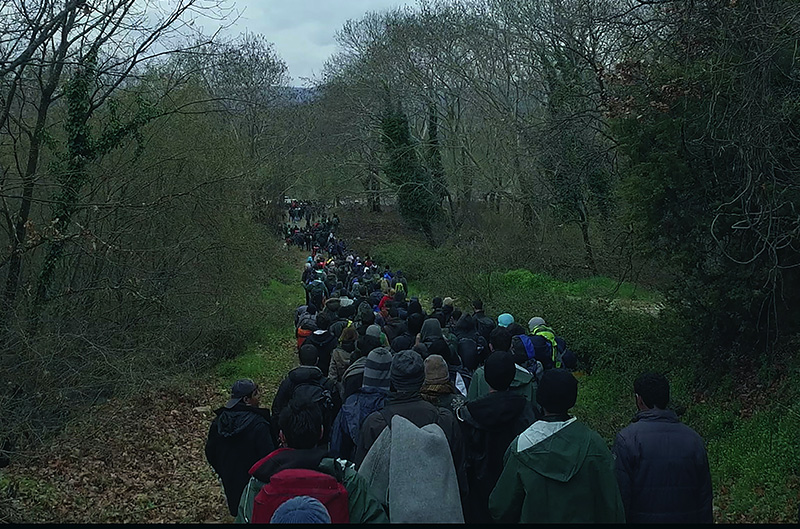 It’s one thing for a documentary to simply tell you that, according to the United Nations, there are approximately 65 million refugees across the globe. It’s another thing for a documentary to really make you feel it. This year, I’ve already seen eight or nine globe-trotting blockbuster films with gargantuan sets and even bigger action. They usually appear to be filmed almost entirely with cameras attached to helicopters, creating aerial shots meant to let you know just how “big” the films are. None have come close to feeling as epic as Human Flow, a new documentary by renowned artist Ai Weiwei about the global human migration currently affecting 23 countries.

Filmed over the course of an entire year, Human Flow somehow manages to capture every major refugee crisis in the world on film. The nuanced politics of these situations can be difficult to understand, even for the migrants and aid workers in the middle of them, so Weiwei wisely hits just the major policy points and moves on to the geographic factors perpetuating each crisis. For example, Human Flow attributes the refugee crisis in Europe to two key causes: (1) European refugee policy developed during the Cold War was constructed to assist defectors from the Soviet Union, usually only a few people declaring refugee status at a time, and (2) narrow land funneled massive groups of refugees into “pressure points” along eastern-European borders so quickly that their refugee systems crashed almost immediately.

Although I’m sure Human Flow misses a lot of the nuance of these situations, with just under two-and-a-half hours and 23 fronts of the global refugee crisis to cover, the documentary works as a relatively well-rounded introduction to the topic. Plenty of experts are interviewed for the film but their ideas feel utterly useless alongside the insights of aid workers and migrants actually experiencing the crisis. Even Weiwei makes several appearances throughout the film, although it feels like he unnecessarily inserts himself for no other reason than his ego. For an activist documentary with the intent of making us see refugees as people instead of numbers, Weiwei using refugees as his own personal props can’t help but seem a little icky.

Weiwei certainly does his fair share of overstepping but he never overshadows the true “star” of the film: the refugees themselves. You’ll be captivated by shot after shot of what seems like an impossible number of people arriving at refugee camps across the world. Footage in the documentary is always stunning; however, it rarely crosses the line of being exploitative. You can tell some images are Weiwei thinking “Wow, this’ll make a cool shot,” but most of the footage serves a very heartfelt purpose of showing viewers the sheer scope of the crisis in an effort to make us concerned enough to properly address it. Human Flow’s greatest achievement isn’t simply showing us the global refugee crisis, it is making us truly feel the weight of 65 million people with nowhere to go.