Home » Film » You Say You Want a Revolution? 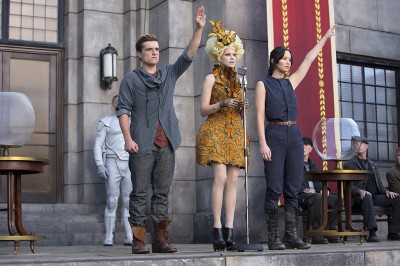 The “99% vs the 1%” analogy at work in The Hunger Games: Catching Fire has all the subtlety of a funeral selfie. But it is precisely this lack of sophistication in message that may make this the most zeitgeist-capturing, intellectually resonant sci-fi series of this era. With a female protagonist, overt racial themes and a wonderfully literal “poor versus the poor while the rich look on” centerpiece, Catching Fire is the best science-fiction sequel since The Empire Strikes Back and is far more important.

Catching Fire begins with Katniss (Jennifer Lawrence) and Peeta (Josh Hutcherson) on their “victor’s tour.” Each year, the previous winner is paraded around to each of the poverty-stricken districts. But there’s a problem this year. Because Katniss forced President Snow (Donald Sutherland) and his government to allow two winners last year, against the rules of the game, the people have begun to realize the most fundamental component necessary for revolution: disobedience is possible.

Against her own explicit intentions, Katniss keeps inadvertently inspiring uprisings. Let’s pause for a second to marvel at what a remarkable female character Katniss is. Her defiance isn’t diminished to some “feisty spiritedness” that makes her attractive to men; her fire burns so strong and bright it provokes a governmental overthrow by accident. In light of this, Snow and the new designer of the hunger games, Plutarch Heavensbee (Philip Seymour Hoffman), devise a plan that sends Katniss and Peeta back into the deadly competition. From there, a bigger budget replaces the limited effects of the first film with epic and astounding adventure.

What’s great about the script from Simon Beaufoy and Michael Arndt is how it delivers on the dual nature of Suzanne Collins’ novel: It is half-spectacle and half-introspection. Director Francis Lawrence infuses the beginning of the film with intimacy and humanity and cuts loose in the second half with a full-throated roar. And that’s really what this film is: the primal scream of the downtrodden when they finally, finally, finally have had enough.

Lawrence is once again jaw-droppingly good. Her ability to elevate melodrama to realism is getting ridiculous at this point. What’s better is that Hutcherson (thankfully) seems to have found his groove. Last time out, his Peeta was too much of a derpy yokel; this time, his selflessness and naked love for Katniss is appropriately endearing. On that note: has there been a better obligatory fictional love triangle in recent memory? Katniss is torn between a childhood romance cultivated over years with a man she likely has no future with and a boy she’d never considered who is as devoted and kind as anyone could want.

But it’s the themes of rebellion that make Catching Fire brilliant. In 1712, Willie Lynch proposed pitting slave against slave in order to keep them “underfoot.” The same mentality persists to this day, extending to the “poor against poor,” allowing the rich to thrive. The Hunger Games franchise is escapism and a wake-up call all at once, and Catching Fire rings that bell loud.