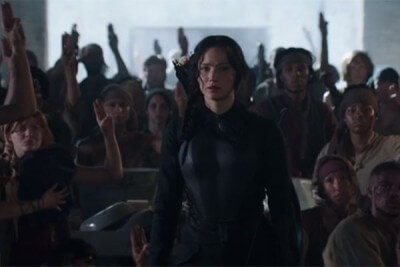 On the one hand, any film subtitled “Part 1” is a naked cash grab. On the other hand, shut up and take my money, Hunger Games. Mockingjay Part 1, like the rest of the franchise, is billed as “Young Adult” fare. Because what hormonal “young adult” doesn’t constantly think about the role of media-savvy propaganda in influencing dissidents to provoke regime change rallied around a hesitant figurehead? If you’re keeping score at home, “should I kiss him/her or not” is a young adult question. “Should I knowingly endorse mass bloodshed for the greater good” is just a damn good question.

Picking up where Catching Fire left off, we see Katniss (Jennifer Lawrence) lookin’ rough. As is wont to happen when you’re placed in a cage and forced to kill humans, Katniss has extreme PTSD and tons of guilt over leaving Peeta (Josh Hutcherson) behind. Now ensconced in the Fraggle-like, underground military bunker of District 13, Katniss is hounded by Plutarch Heavensbee (Philip Seymour Hoffman) and President Coin (Julianne Moore) to become their symbolic leader. In a hilarious scene, Plutarch lays out his plans for propaganda, which he gigglingly calls “propos.”

Because Katniss sucks at acting, they send her into the field accompanied by a director, Cressida (Natalie Dormer), and cameramen. When she sees the price paid by the impoverished who have used her near-childish acts of personal rebellion as a catalyst for a holistic revolution, Katniss finally understands that the stakes are bigger than her love triangle. Speaking of which, it turns out President Snow (Donald Sutherland) kidnapped Peeta and is using him in the press to counter Plutarch’s propos. In the film’s most brilliant sequences, Katniss and Peeta exchange dueling rhetorical instigations, a “propo off,” if you will.

It’s hard to judge a film that outright tells you it’s half a movie. Functionally, it does little to further events in the larger story. Lawrence gives another raw, broken performance in a series that will define her acting legacy. The sparse action is well delivered by director Frances Lawrence. But, honestly, nothing in Mockingjay Part 1 is necessary. Audiences would accept Katniss immediately embarking on a final conflict to overthrow the Capital. Of course, this is why Mockingjay Part 1 is what makes The Hunger Games special.

This film is a psychological exploration of the complex genesis of dissident movements. The faceless military of District 13 is no less savage than the faceless militia of the Capital; they just have crappier uniforms. Coin’s manipulation of Katniss isn’t as overt as Snow’s torturing of Peeta, but both are puppeteers. Even the core conceit of the rebellion is questioned, as Katniss pauses to consider that maybe the Capital is right; maybe avoiding huge death tolls is worth surrendering certain freedom.

As a movie unto itself, Mockingjay Part 1 should earn a grade of “incomplete.” It opens and ends mid-thought and has absolutely no arc. Yet, when absorbed into the series as a whole, this chapter supplies some of the most thought-provoking, sophisticated thematic content to ever find its way into so-called “young adult” science fiction.