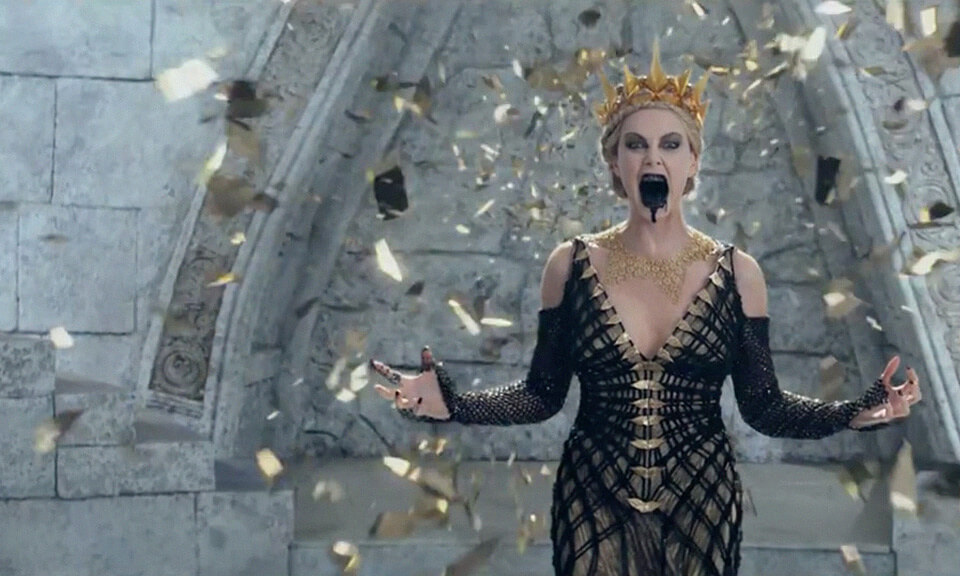 Oh dear God should The Huntsman: Winter’s War not work. Like, it should cause uncontrollable vomiting and permanent erectile dysfunction. So, sweet Jeebus, do I have my work cut out for me here. Nobody look at the score I gave at the bottom before reading all of this first, okay? Oh, come on! You looked. Just now. You looked just now, didn’t you? Dammit.

Fine, to recap: This movie is a sequel to Snow White and the Huntsman, a completely unneeded “action-oriented” retelling of the decidedly non-action-oriented fairy tale about Snow White. Oh, and this sequel does not feature Snow White. She’s mentioned, but it’s in the same way a family member slips up in public and refers to “Uncle Eddie” who nobody has seen “since the incident.” Snow White’s not here because this is a prequel. Until it becomes a sequel. A sequel about defeating Ravenna (Charlize Theron) who died in the first movie. But who is now not dead. Well, mostly not dead.

Anyhoo, Snow White is gone, but the Huntsman (Chis Hemsworth) is definitely still around. And apparently his real name is “Eric,” which is the second least “warrior-sounding” name after Chester. His wife, Sara (Jessica Chastain), who isn’t dead at the beginning of this movie but was definitely dead in the first movie, dies early in the prequel part of this movie until she isn’t dead any more in the sequel part. Still with me?

Eric and Sara, who fight like bad-ass medieval ninjas but whose names make them sound like they should be passive-aggressively hosting a couples Tupperware party, are joined by some dwarfs, including Nion (Nick Frost) and Gryff (Rob Brydon), as they attempt to destroy an evil mirror I would swear was destroyed in the first movie. This time, they also have to fight against the ice queen Freya (Emily Blunt), who is totally and completely Elsa from Frozen if Elsa from Frozen lost her mind from listening to kids sing songs about Elsa from Frozen all day.

So why, given the cyclone of clustercluck I just described, did I like it? Because from the first few moments when Liam Neeson delivers a voiceover with dulcet tones typically reserved for threatening terrorist testicles via cell phones, Winter’s War tells you it wants nothing more than to be cheeky and fun to look at. From Frost and Brydon’s banter to incredibly explicit sex jokes, at no point is there any passing attempt to convince the audience of emotional or intellectual weight. Just inoffensive, silly pleasure.

Roger Ebert, who is still sorely missed, said you judge a movie how it tells you to judge it. A Winter’s War asked me to decide if I had fun. I did. I liked the cool goblins who rocked Mr. T’s bling from the 1980s for no reason. I liked Chastain and Hemsworth’s chemistry. I loved Blunt and Theron’s overacting diva duel. You can’t, and shouldn’t, shut your brain off for any entertainment. But you can be asked by said entertainment to forgive its stupidity in exchange for a good time. A Winter’s War asked. I said yes. And that’s how babies are made.