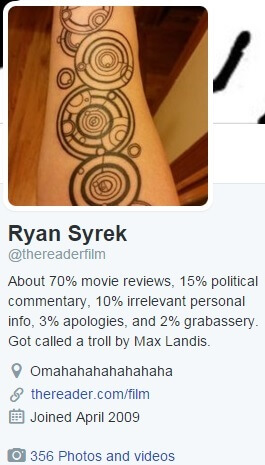 The advent of social media did more than just open up a new way for perverted manbabies to harass women for the audacious crime of daring to be a woman; it gave every Tom, Dick and Dick (there are a lot of Dicks on social media) a tiny personal megaphone through which to yell whatever they want out into the ether. In my little corner of the world, this completely changed film forever…for the best and worst.

On the pro side, I legit cherish moments like one I had the other day, where I engaged in a quippy, intelligent back and forth for a few hours about the nuances of a film at like 5 am with someone on the East Coast. On the “some of you will burn in hell” side, you have the spoiler monsters: grotesque demonic unpersons who relish ruining things for other people because they have micropenises just like Hitler did. But in the gray area lurks a four-letter word produced most often by people you like describing something you hope to love: hype.

It’s not like hype is a new thing. Fans standing in lines that circled around movie theaters in 1977 to see Star Wars were geeked out of their mind without the aid of #UseTheForce. But social media turned the hype machine from a grenade lobbed out of the mouths of friends in conversation to a nuclear warhead sometimes launched by studios. Daniel Kehrer from Forbes had a great look at the costs of movie marketing not too long ago. He concluded that studios drop an average of $30 milly to market the typical PG-13 action film. It’s quite common for marketing budgets to come close to or even tie the costs of production in some cases. Social media? That’s hella free. And if you have clever, competent people running it, like the gang behind Deadpool, you can get some pretty nice return on your $0 investment.

And that’s all fine too, to be honest. Movie shills are gonna shill movies. When somebody with the Twitter handle @FoxStudios tweets “Deadpool makes the Sistine Chapel look like a finger-painting made out of feces,” you can disregard it. But what about when your friends lose their mind for a movie before you can possibly check it out? What about when critics you love drop hyperbole bombs coming out of a festival months before a film will reach you? Remember, we live in an age where hyperbolic rhetoric is the norm. We don’t say “That was really funny” in response to a clever online jibe. No, we say “I’m dead.” For the love of God, we ruined the word literally. Video killed the radio star, and hyperbole made it so “literally” can now mean the opposite of literally.

Despite the rad work of my friends down at Film Streams (read about their awesome news in my Cutting Room column that should be located very near these words), Omaha doesn’t get all films as early as many other cities (including comparable ones like Kansas City). In particular, if it is an art/indie/foreign flick and Film Streams doesn’t have space on their 2 screens (soon to be 3…seriously, read that Cutting Room column), we may not ever have a chance to see it on the big screen. Meanwhile, cyber amigos in cities studios actually respect are barfing effusive praise onto every social media outlet. I can be literally (not literally, but literally) drowning in hype for a movie I can’t physically access for months.

As reasonable and intellectual as you can try to be, this affects you. It has to. You’re only human. Unless Donald Drumpf is reading this… It’s not fair in any way to the movie, but when your friends have assured you that it’s the cinematic equivalent of ascending into heaving while Jesus gives you a piggyback ride, even if the movie is only “good,” you feel disappointed. Two quick examples: John Wick and Looper. Social media didn’t tell me these would be exceptional films; it told me that John Wick redefined action movies forever and that Looper was the best time-travel movie ever made. I tried my hardest to tune out that hype, but you can’t unread words you’ve read. It’s like that old saying, “You can’t put Christina Aguilera back into the bottle.” Or something… As a result, two movies I have grown to love and would give a grade in the “A” range to now got labeled “B-“ and “C,” respectively. It’s as good a time as any to mention I believe film’s should get two grades from critics: One when we first see it, and one if we see it a second time. But the point is, friends who were excited about something I was excited about made me so excited that I wasn’t excited when I left the theater.

Worse yet, sometimes hype gets wasted on the undeserving. There are but three ways indie/art/foreign films break through to mass audiences: 1.) They receive adequate advertising from their studio (any indie director reading this will have to pause until they stop laughing), 2.) they win an award or get nominated for a big one or 3.) people hype the hell out of it on social media. This is why I saw The Witch, a movie that received just so much social media love, I couldn’t resist it, even though I generally loathe horror. If you read my review, hey thanks, pal! If you didn’t, know that I hated The Witch. Plus, I was extra pissed because “hype bombs” for smaller movies are seemingly rationed out in insanely tiny supplies. We get one, maybe two, indie flicks a year that ride a wave of the tweets and the Facebook to a degree of mainstream attention. Typically, we waste it on the coming-of-age story about a white teenage dude. But the last two years, it was It Follows and The Witch, both of which made me madder than I get when I think of Puppy-Monkey-Baby.

The point is, hype can’t be trusted. Hell, FiveThirtyEight just ran a great piece on how Fandango just straight LIES to you about how much people like a movie. They inflate their aggregate ratings numbers, a fact I knew had to be true after they said the new Fantastic Four movie had an average rating of 3/5. You can’t find three human beings in America who liked that movie. So between the studios using social media for advertising; friends bathing our eyeballs in hyperbolic, all caps joygasms and misplaced championing of undeserving indie fare, what are we to do?

I mean, the answer is realistically nothing. Like, if I could fix it, I wouldn’t be writing this. But I can tell you that I personally have begun watching how massively I hype a thing. “But Ryan, I’ve seen your Twitter! Didn’t you say Mad Max: Fury Road literally brought you back from the dead and redeemed your soul?” Yes. I probably did. But I only speak in the overly exaggerated parlance of our times if I really want to draw attention to something. I’m trying very hard to stop with the binary “OMG” or “SMDH.” If I like a movie, I only use social media to share a link to my review or address a particular angle. I realize that won’t change anyone or anything, but at least I feel better about not contributing to the problem.

Look, I love talking about movies. Even when white dudes consumed by guilt about loving Hateful 8 desperately try to excuse Quentin Tarantino’s naked racism and misogyny throw verbal rocks at me, dialogue about movies is still my favorite thing. I’ll take the negatives that come with hype for the positives that come with a platform to engage in more cinematic discussions. But if any of you have tips for how to keep hype in check, hit me up. Because, I have to tell you, given what I’m hearing about the actual content of Batman v Superman: Dawn of Justice, fanboys who have been tweeting that they are only staying alive to see the film are going to need a lot of counseling.