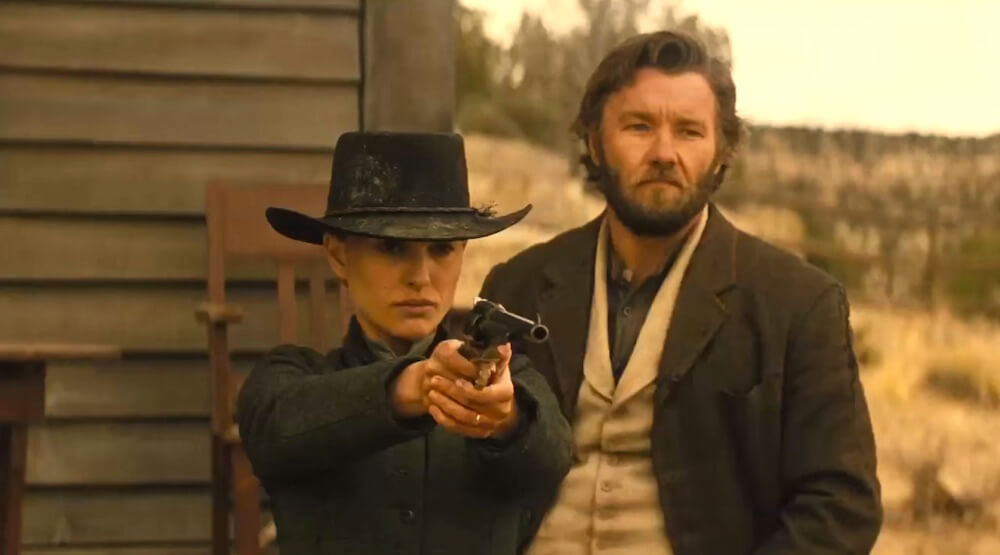 Oh man, 2016 has gotta feel so nervous, knowing its elder sibling, 2015, was so flinging-flanging good. Father Time has to be like “No, it’s totally okay if you want to go in to ophthalmology, 2016. Not everyone can be a brain surgeon like 2015.” I mean, 2015 resurrected Star Wars, introduced Imperator Furiosa (Mad Max: Fury Road) and had so many slightly more minor triumphs, 2016 is probably already working on a drinking problem. All you can do is take it “one day at a time,” 2016. Or, in the case of this preview, one month at a time, as we’re going to take a look at the best offering for each month of the next year.

January is typically slim pickings for good movie content, unless you count the spillover from 2015 that didn’t get a wide release yet. It’s like 2016 is trying to whip up a home-cooked meal, but we’re all still pigging out on 2015’s leftovers. That said, Jane Got a Gun looks to have a wee bit of promise. I mean, Natalie Portman in a Western is going to put my butt in a seat every time. A woman asks her ex to help protect her current outlaw hubs from a deadly gang. Pew, pew, pew! I’ll ride off into the sunset for Ms. Portman any time.

The Big Lebowski is still the funniest movie I’ve ever seen. And that’s despite how many times people have tried to ruin it with unfunny merchandise, endless quotes and misquotes and various themed parties. Thus, when the Coen brothers announce a new comedy, it fills me with great excitement. That Hail, Cesar! also stars George Clooney and Channing Tatum and has a silly, breezy, early-days-of-Hollywood feel only adds to my excitement level. I’m so titillated, my shirt looks like Clooney’s bat costume.

Speaking of costumes, Batman v Superman: Dawn of Justice is apparently going to come out with that title getting changed. This naked cash grab has looked interesting, then silly, then interestingly silly and promises to be either a good movie or a total train wreck, either of which is satisfying. Jesse Eisenberg appears to think he’s in Adam West’s 1960s Batman TV show, Ben Affleck is grayed and grumpy and apparently there’s a weird Gollum creature. Everyone will see this for good reasons or bad.

Quietly, Jake Gyllenhaal has become one of the best working actors. Demolition looks to be another notch on his “who you callin’ Bubble Boy” bedpost of success. An introspective look at a man experiencing tragedy, nothing about the subject matter really suggests anything special. But neither did the logline for Nightcrawler, and that movie showed Jake G is hella great. Just know, JG, if you get the Oscar before Leo, I’d watch yourself.

I want all comic book movies to be great fun all the time. I have full faith that Captain America: Civil War will be. Featuring everyone who has ever worn spandex in a Marvel movie and lived to tell the tale, this brouhaha not only pits Cap against Iron Man, it introduces Black Panther and, oh yeah, reboots Spider-man. Honestly, some days I just want to build a time machine, go back to the lunchroom in middle school, and show preteen Ryan how cool things turn out. I mean, I’d also warn him about the thing in the shower in 9th grade, but also the movie thing.

Shane Black is a golden god. His dialogue is so hot, actors get third-degree burns on their tongues from it. Heaven to me is a new Black noir film every day. The Nice Guys gives Ryan Gosling and Russell Crowe as playthings for Black to use. The first red-band trailer featured a hilarious scene involving a body splattering on concrete and Gosling on the toilet. So, yeah, I feel comfortable telling you this is going to be perfect.

The best part of the internet is that everyone using it is smart, kind and responsible. Much like when NBC ran “The Wiz” and dumb racists took to Twitter to suggest “Everyone would be pissed about an all-white version of The Wizard of Oz,” dumb sexists freaked when director Paul Feig announced the Ghostbusters reboot would be ladies only. Those women are Leslie Jones, Kate McKinnon, Melissa McCarthy and Kristen Wiig. They are all hilarious. They are all bad-ass. I am all the way in for this one.

I get labeled a “DC hater” a lot. Because, if you didn’t know, there are still ongoing nerd gang wars between Marvel and DC comic fans. Nobody gets hurt, unless you count feelings. That said, I’m stupid excited for Suicide Squad, which brings back the Joker (Jared Leto), gives Margot Robbie the spotlight she deserves and looks Bat(man)shit insane. There’s a crocodile gangster man in a squad with a witch and Will Smith. Yes please, thank you. I would like to be watching this bonkers-ness now.

I gotta thing for Westerns. And one of the best (if not the best) is The Magnificent Seven. Considering the original is a remake of Seven Samurai, nobody is allowed to be mad they’re remaking the remake. Co-written by “True Detective” scribe Nic Pizzolatto and starring Chris Pratt, Denzel Washington and Vincent D’Onofrio, I don’t see how this can be anything other than rootin’ tootin’ fantastic. The original was super violent. I can’t see why this one wouldn’t be as well. I mention that last part as a good thing but now realize that maybe it sounded like a bad thing.

The first Jack Reacher movie deserved better. It was a great Tom Cruise-as-movie-star movie and had goddamn living legend Werner Herzog as a villain who ate his own hand off. Sadly, there’s no Herzog up in Jack Reacher: Never Go Back. Still, a chance to watch Cruise revisit this noir-esque world makes me happy. Also, it’s going to really make your dad and/or grandpa happy, as literally all white dads and grandpas love the book series.

Of all the Marvel movies, Doctor Strange has the most potential to me. All the superhero movies try to be “grounded” and “real.” Here’s a movie about a surgeon who learns magic to fight demons that come through other dimensions. That said wizard is played by Benedict Cumberbatch is only delicious icing on a potentially hallucinatory cake. Oh, and Rachel McAdams is in it. She makes everything 45% better just by being generally in the area.

Now that Star Wars is actually, totally, really, honestly back, all eyes can turn to Star Wars: Rogue One, the first spin-off in the franchise’s history. Theoretically, they’re going to make a Star Wars movie every year. I say theoretically, because if Rogue One rips a fart, that plan will change dramatically. Luckily, this movie is an intergalactic heist movie about stealing the plans for the Death Star, which sounds so unspeakably cool, I’m drooling. As are the Disney accountants.

Not being scheduled won’t stop me from hyping The Neon Demon, which is the latest from writer/director Nicolas Windig Refn. What he lacks in proper name spelling, he more than makes up for in style. As one of the 2-3 people who loved the crap out of Only God Forgives, the potential of Refn pairing up with Keanu Reeves for a quasi-horror movie about “beauty obsessed women” is more alluring than can be described. I tried to, but it came out as a series of increasingly weird, dark adjectives, which is actually pretty much what watching Refn movie feels like.