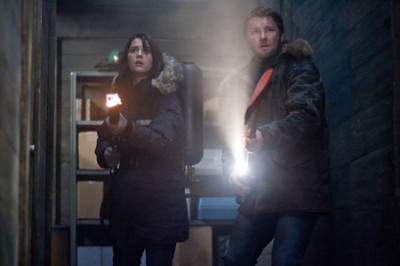 Most modern filmmakers prefer two-headed CGI alien-monsters over spooky atmospheric tension, assuming that too much atmosphere would leave today’s younger demographic texting “bored lol” until the theater was lit to daylight by their phones. Matthijs van Heijningen Jr, director of The Thing, is no exception. Although he has created a serviceable prequel to the 1982 John Carpenter flick of the same name, middle-aged Carpenter fan-boys (fan-men?) and horror movie purists will decry 2011’s version as having no soul—and they’re probably right.

The Thing begins with its hero, Kate Loyd (Mary Elizabeth Winstead), working late in her lab. In reality, Kate could have simply been named “Paleontologist,” as that one word is all the characterization given to her. Her friend and his boss, Dr. Sander Halvorson (Ulrich Thomsen), have a proposition for Paleontologist: come to Antarctica, right now, to work on a secret project. Paleontologist, who obviously has nothing better to do but work late, agrees.

Within a few cinema seconds, Paleontologist is flying via helicopter over an expanse of icy nothingness with a bunch of Norwegian dudes and a couple of Americans thrown in for good measure—and by “good measure,” I mean to help increase the body count. As luck would have it, the herd of Scandinavians had found an alien frozen in a block of ice like Han Solo in carbonite.

An impressive scientific discovery to be sure, it’s all high-fives and Norwegian hootenanny until the good Dr. Goofenheimer decides to take a tissue sample. This intrusion makes the alien, who’s obviously read the decision in California’s Second District of Appeals ruling in Moore vs. Regents (1988) concerning the ownership and commercialization of tissue samples, freak out. Up to this point, the movie has been much like the alien—a little lifeless, but you kind of know you’re going to have some fun if you wait patiently.

What follows is, by all objective measure, a blood bath. Just as in Carpenter’s version, the alien replicates living beings, which turns the movie into a good old-fashioned game of “Where’s Weirdo,” creating opportunities for a jump-scare every time someone enters the room. This suspenseful element is when The Thing offers real, viable thrills, blending monster horror with a mysterious “And Then There Were None” element.

Despite decades upon decades of improvements in special effects, everything in the movie screams fake, from the helicopters to the snow-cats to the super-loud “blowing wind” sound effects, and of course, the monster itself. The Thing’s insectoid killer isn’t nearly as visually terrifying as the H.R. Giger-designed alien from Alien, which is old enough to be its grand-alien.

Unabashedly unoriginal, 2011’s The Thing is a fun homage to the 1982 film, which was a remake itself of a 1951 flick. Placing the movie’s plot prior to the action in Carpenter’s film was clever, and that alone will carve a small niche for it in the pantheon of horror movies. Beyond that, 2011’s The Thing needs to rely on a charitable Halloween season and hope that the indignant howls of horror movie purists are drowned out by copious blowing-wind sound effects.