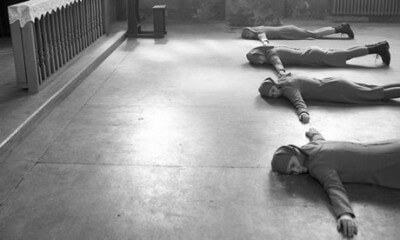 If the blurb for a movie contains the words “Nazi occupation” and “dark family secret,” you can safely assume it won’t one day play on Comedy Central. Ida is permeated with such thick, dank sorrow that I began counting the number of times any character smiled. I had to open it up to “not explicitly frowning” before someone cracked the scoreboard.  This isn’t to say Ida is overly pessimistic; the thematic messages of emotional closure and willfully shaping one’s own identity are fairly empowering. It is, however, sad as shit.

The titular character doesn’t know she’s the titular character. To explain, Anna (Agata Trzebuchowska) is a young woman in 1960s Poland about to take her vows and become a full-fledged nun. She’s been living at the convent since she was a child; the Christian institution has become so synonymous with her sense of self, the mere thought of leaving the convent for a brief while terrifies her. But the older nuns force her to leave, demanding she visit her only living relative, her Aunt Wanda (Agata Kulesza).

Aunt Wanda is an anti-nun; she drinks, smokes and screws like sinning is what she was born to do. She and Anna make an odd couple, one wearing a habit while the other has many of them. And Wanda drops a truth bomb I mentioned above straight out the gate, telling Anna that she’s actually Ida. Oh, and she’s Jewish, which was not a safe thing to be when she was growing up. At Anna/Ida’s goading, the pair begin to dig into what happened to her parents. It’s kind of like Philomena, in that it’s a mystery about what happened to a missing family member, only Ida is way sadder. This is saying something, considering Philomena was about stolen babies and AIDS.

Trzebuchowska has one of the tougher jobs an actor can have: do a ton with very little. The dialogue is so sparse, if you had a $20 bill and were charged per word, you’d have enough left over for a nice dinner. Almost everything Trzebuchowska conveys is through wrinkled brows, pursed lips and distant eyes. Kulesza, on the other hand, gets to really shine in flashy scenes of traumatic breakdown and anger. The two women contrast in a way that isn’t just for simple dramatic tension; together they form a complex portrait of the effect of trauma and force on the identities of women.

Director Pawel Pawlikowski keeps things tight and moving, as if he knew that asking to spend too much time in such a dark corner of human emotion would be mean. In fact, an argument can be made that even though the situational status quo may not change much by the end, everything is different and “better” emotionally, at least for Anna. Actually, as the coy title suggests, the film is actually a journey of one woman truly discovering herself and choosing to claim the parts of her she wants to claim. In other words, it’s the story of Anna becoming Ida.