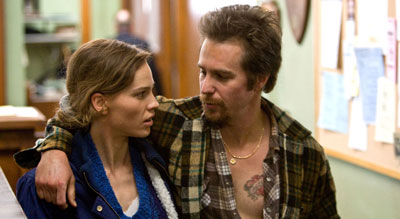 Simply put, director Tony Goldwyn’s Conviction is your average end-of-the-year Oscar hopeful. Not that it isn’t any good — it features a few fine performances from very talented actors and is undeniably effective as a drama — it just isn’t anything special. Ripped from some fairly recent headlines, Conviction concerns a small town single mother named Betty Anne Waters (Hilary Swank). Her brother Kenny (Sam Rockwell), after many years of constant run-ins with the law, finds himself convicted of a grisly murder. Convinced of his innocence and facing an uninterested and possibly corrupt justice system, Betty Anne works her way from GED to law degree, literally devoting her life to getting him acquitted. We’re told that this law degree takes something like 16 years for Betty Anne to obtain, but you’d never know it without Rockwell’s reliance on aging makeup, which increases as the film moves on. We spend a lot of the movie in a brief chunk of the past, where we see Betty Anne and Kenny’s attempts to escape a tough home life, their petty thievery and, in general, the building of their inextricable bond. These childhood scenes are the finest in the film. But most of the time we’re in a vacuum with Betty Anne as she struggles with her grades and searches (for quite a long time) for evidence. Played with equal parts heart and corniness by Swank, Betty Anne is all Boston accent and Hollywood-style mock resilience, faulted only for her determination and saintliness, less a real person than a bighearted cliché. As the well-meaning but manipulative Kenny, Rockwell is very impressive. If it weren’t for Juliette Lewis’ ability to command the screen like few others (which she does here with only two scenes as Kenny’s former fling Roseanna), Rockwell’s would easily be the most memorable performance. Just about everything in Conviction is fine, meaning that a few things are almost great, but nothing is spectacular. There’s something that prevents us from really connecting to anything emotionally. Most likely, that’s due to Pamela Gray’s rambling, repetitive screenplay, which trudges through countless unsurprising moments to an ending that we could’ve predicted verbatim. Why is it that this movie leaves you wondering, “Who cares”? Betty Anne’s fight to join the system in order to beat it is a compelling story, no doubt about it. Unfortunately, Conviction never lands on a particularly compelling way to tell it. Grade: C