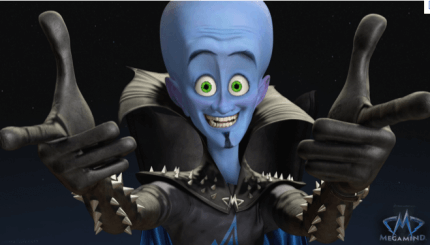 In an animated PG movie, children in the audience provide a good barometer for the film’s pacing. A single scene of over-their-head dialog or the tiniest pause in plot can result in 100 formerly awed children wiggling in their seats, disembarking en masse for the restrooms or, in the worst case, checking out the action at the video arcade. Although it’s a fun superhero romp with a cavalcade of great voice actors, the Dreamworks film Megamind is definitely guilty of eliciting some laughs — and some seat-wiggling. Megamind begins with its titular, villainous hero (Will Ferrell) narrating. Both Megamind and his nemesis Metro Man (Brad Pitt) have Superman-esque origin stories — as infants, they were rocketed from dying planets to Earth. Metro Man landed in a McMansion to be raised by turtlenecked WASPS, whereas Megamind landed in a prison to be raised by criminals. Predictably, Metro Man grows up to be the well-coifed, giant-chinned, grinning savior and hero of Metro City. With his minion Minion (David Cross) in tow, Megamind grows up to be Metro Man’s evil, giant-headed, gadget-loving antithesis. Local reporter Roxanne Ritchi (Tina Fey) joins the mix as the love interest for just about everyone in the film (as she seems to be the movie’s only female character). And Jonah Hill lends his easily recognizable voice (and shtick) to Hal, Ritchi’s love-addled cameraman who later turns into a superhero. Megamind has Ferrell and Fey’s funny fingerprints all over it — their dry wit and impeccable comic timing make the dialog in an otherwise generic script a lot of fun for adults and children. To a background of raucous butt-rock (provided by the likes of Guns n’ Roses, AC/DC and Ozzy), the talented cast does its best to enliven a film that seems to be every bit as laden with clichés as the songs “Back in Black” or “Bad to the Bone.” With its characters’ relationships resulting in anguish and unrequited love, Megamind might be a little complicated for most kids. Adults, when they’re not laughing, will find its please-look-back-at-me-while-we’re-crying-in-the-rain clichés kind of boring. One of Megamind ’s biggest sins, however, is its lack of resonating themes — beyond a half-hearted attempt at “Don’t judge a book by its cover.” Its other drawback, which won’t ruin the movie for anyone, is the its occasional slow-down in pacing, which despite the wonders of modern technology, still doesn’t look very good in 3D. Grade: B-