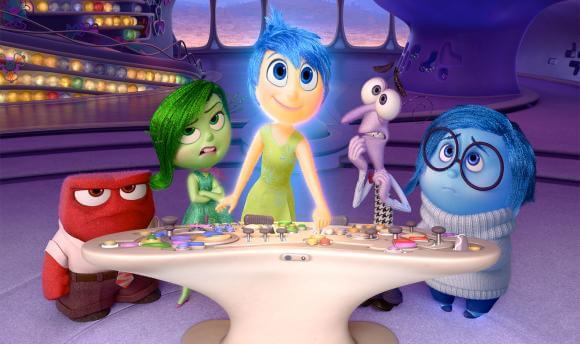 Inside Out plops us in the brainspace of an 11-year-old girl, Riley (Kaitlyn Dias), revealing her behaviors to be controlled by five primary emotions: Joy (Amy Poehler), Sadness (Phyllis Smith), Fear (Bill Hader), Anger (Lewis Black) and Disgust (Mindy Kaling). My first set of questions: Why disgust? How did that make the cut as a dominant emotion? What about love or jealousy or shame or pride? I could go on…

Each of the emotions takes their turn at the controls, their influence creating memories. During a particularly tumultuous time, Riley’s Mom (Diane Lane) and Dad (Kyle MacLachlan) suddenly move her from Minnesota to California, things go berserk in the “control room.” Joy and Sadness are separated from the group and must make it back before Anger, Disgust and Fear turn Riley into a worse version of herself. My second set of questions: So logic doesn’t exist in this world? Like, I understand this is a kid’s movie but “you are a creature ruled solely by your basic emotions” is a horrifying message. Why go to school if you never apply knowledge you just emotionally react to stuff?

You may think that perhaps adults in this version of reality don’t work this way and actually use their knowledge, but you’d be wrong. We pop into various characters’ brains/control rooms. They are all run the same way, by the same emotions. Actually, that’s another question: Why is it that almost every single other character has emotion creatures that all share one gender except Riley? It’d be cool if that was on purpose and suggested somehow that she didn’t conform to a simplistic binary concept of gender, but as it stands right now it’s just weirdly unexplained.

More concerning is that the film’s view of the value that Sadness adds to our life is “it makes other people feel sorry for you?” Yikes! I was hoping it would be either a quasi-Taoist concept of Joy requiring Sadness to exist or that Sadness would be the catalyst for some kind of internal strengthening. Nope! Sadness makes the little girl cry so people know to help her (because she can’t help herself). While I applaud the film’s attempt to deploy a climax that involves emotional catharsis instead of throwing some bad guy off a cliff like most animated movies, it didn’t feel nuanced so much as “meh.”

There are bright spots: Bing Bong (Richard Kind), Riley’s forgotten imaginary friend, is just wonderful. Gags like how the Forgetters keep finding an old commercial jingle and sending it up to the control room for no reason land quite well. But this is a movie that places emotions on such a high pedestal that they come to life at the sake of all intellect. I guess I was hoping to feel a little bit more than “that’s kinda neat.” Three of the last four Pixar movies have been sequels. Perhaps the expectation that this original idea would be up to par with their excellent past was simply too lofty. Look at me, I feel something other than Joy, Sadness, Disgust, Anger or Fear.