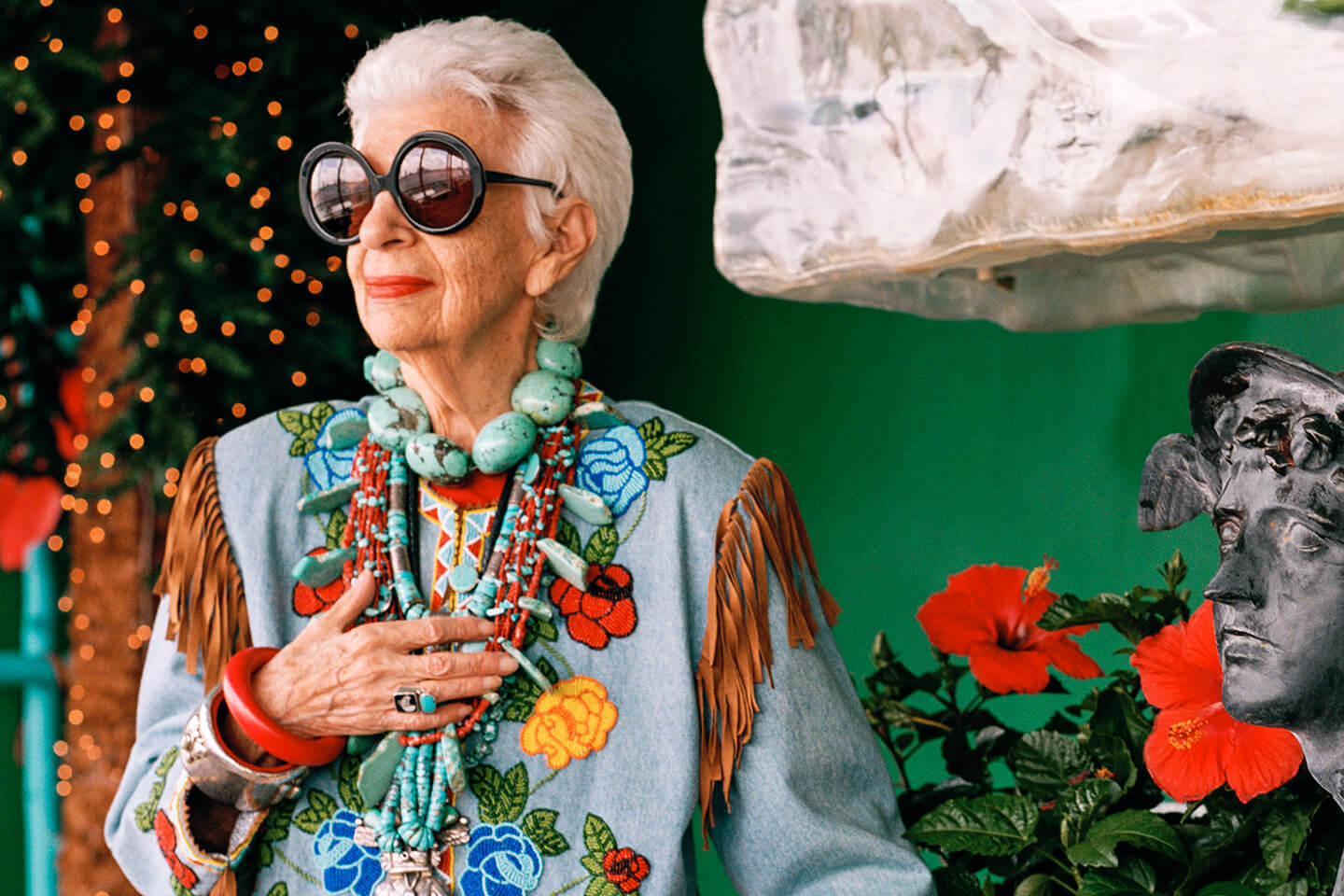 Iris Apfel is a fashion icon, still thriving in her 90s, who wears big sunglasses that are impossible not to describe as owlish. She is still building a world-renowned collection of eccentric clothing and oversized jewelry. She has a loving husband, too…and she leaves her Christmas decorations up for most of the year. That’s all I really know about Apfel, who sure seems like a fun lady but is vastly unexplored in the final film from iconic documentary filmmaker Albert Maysles, who died last March.  Iris is a disappointing send-off for one of the cinema greats and a just sort-of okay documentary on its own.

Iris is pretty standard documentary stuff: we get a quick summary of Apfel’s early life, accompanied by old photos, a rundown of her resume, scenes of top fashion designers bowing at her feet. Some of her personality quirks surface here and there, and she makes a few observations about getting older. None of it is very compelling. It’s a puff piece, and I suppose puff pieces aren’t really meant to be. Apfel’s relationship with her husband, Carl, who celebrates his 100th birthday in the film, never quite finds its place. Its inclusion seems more obligatory than anything.

Despite Maysles being famous for filming moments when his subjects let their guards down, Iris works best when Apfel is being interviewed. His “fly on the wall” technique doesn’t do much here, except capture one funny exchange of Apfel haggling with a shopkeeper over the price of a jacket. “You can do better,” she remarks in deadpan after the shopkeeper offers her a great deal. When Maysles interviews Apfel, we get insights into her personality that the rest of Iris mentions but never explores.

Throughout the film, almost too often (again, this is a puff piece), the people who know Apfel the best describe her as reluctantly cranky and as something of a powerhouse. I certainly don’t think they’re wrong, but it’s certainly not a good sign for the film that I didn’t get that impression…like at all. In the 80 minutes I spent with her, Apfel appeared to be a perfectly pleasant and relaxed human being. She may have seized the day, but not with any particular charisma or gravitas. Given her status as an icon, I’m sure she has both, but they weren’t shown here. That really is too bad.

Iris is a documentary that attempts to deliver a pretty standard profile of a properly quirky subject, and fails by telling us about the quirky subject without showing much of the quirk. Toward the end, it scrambles to find a message bigger than, “Apfel is quite the character,” and throws a few themes out that don’t really stick.  “Be yourself.” Well, sure. “Artists struggle to refresh their creativity in old age.” That’s probably true, but Apfel doesn’t seem to have that problem. Late in the film, Apfel decides to sell some of her extensive collection because, after all, you can’t take it with you. You won’t take much away from Iris.